Chain pulls out of small towns, says it's 'no longer a non-urban – or, for some of you all, a rural – hospital company' 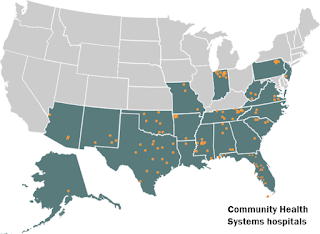 In politics, if you want to know where things are coming from and where they are headed, one maxim is to "follow the money." That could apply to the evolution of what used to be a rural hospital chain, Community Health Systems of Franklin, Tenn.

"The company has been selling off or closing poorly performing rural hospitals for the last several years," reports Blake Farmer of Nashville Public Radio. "The selling spree is primarily meant to pay down the company's outsized debt load left over from when Community Health was growing as fast as it could. But the hospital chain was also strategically pulling out of small towns." It has 111 hospitals in 20 states.

Farmer adds, "CEO Wayne Smith told investors gathered at this week's annual J.P. Morgan Healthcare Conference in San Francisco that it's almost entirely left communities with fewer than 50,000 people — once its calling card compared to competing hospital chains." Smith said during a presentation, "We're no longer a non-urban – or, for some of you all, a rural – hospital company."

Tennessee has not expanded Medicaid, but in 2015, when the company had a choice of closing a hospital in its home state and one just across the state line in Kentucky, which had expanded the program, it chose the latter: Parkway Memorial Hospital in Fulton. Much of the now-closed hospital's service area was in Tennessee.

"Public officials from Fulton County wanted to take over the hospital and find other providers who might continue services in the area, but CHS rejected this offer, likely, to pre-empt competition for patients in the county," said a study by the Kaiser Commission on Medicaid and the Uninsured and the Urban Institute. "Further, CHS placed restrictions on the use of the hospital – namely, it permitted no acute-care facility to operate there, an action that one respondent said 'strangled' the community’s access to local health care services."
Written by Al Cross Posted at 1/12/2019 10:54:00 PM