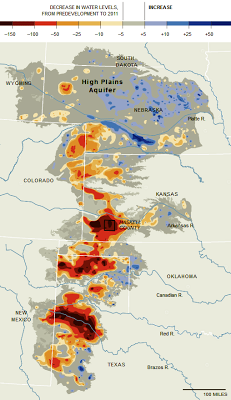 America's high plains, especially the southern part, continue to suffer from drought and overuse, leaving many wells completely drained, or well on the way to being used up, reports Michael Wines for The New York Times.

"Vast stretches of Texas farmland lying over the aquifer no longer support irrigation," reports Wines. "In west-central Kansas, up to a fifth of the irrigated farmland along a 100-mile swath of the aquifer has already gone dry. In many other places, there no longer is enough water to supply farmers’ peak needs during Kansas’ scorching summers." The worst part, Wines reports, is that once the water is gone, it could take hundreds or thousands of years to be restored.

Bill Golden, an agriculture economist at Kansas State University, told Wines that most farmers will adapt to farming without irrigation. “The revenue losses are there,” he said. “But they’re not as tremendously significant as one might think.” Already some farmers have shifting their focus to other areas, such as dairy farming, which uses less water, but others continue to grow corn, a crop that requires large amounts of water, reports Wines. (Read more)

We reported on diminishing groundwater in the high plains here, and in Texas here.
Written by Tim Mandell Posted at 5/20/2013 03:50:00 PM