Miner who campaigns for safety gets good writeup

Ralph Dunlop of The Courier-Journal has a great profile in the Christmas Day paper of "perhaps the most active, relentless and combative mine-safety advocate in Kentucky, at least among working coal miners," Scott Howard of Harlan County.
Written by Al Cross Posted at 12/24/2009 11:01:00 PM No comments:

Health bill will benefit rural poor, but maybe not Democrats in 2010

If you have time on this Christmas weekend to read only one political analysis of the health-care issue, we recommend the thorough, evenhanded and salient piece by John Harris, editor in chief of Politico, and reporters Alexander Burns and Josh Gerstein. It says both parties have staked their near-term and maybe long-term future on the issue, and offers scenarios that would benefit each party.

The story has one paragraph which should make rural journalists realize their responsibility to illuminate the issue for their readers, listeners and viewers, not just trade in one-sided opinion pieces. Harris writes, "The political impact of the bill could be amplified by its geographic reach. Many of the bill’s long-term benefits in terms of insurance subsidies for the poor will go to states in the South where Republicans have held sway for decades. However, many of the beneficiaries will be minorities and the rural poor, who have traditionally had a low turnout in elections." (Read more)
Written by Al Cross Posted at 12/24/2009 10:15:00 PM 1 comment:

Education reporters, take note: "The federal Race to the Top competition is helping to drive a flurry of measures nationwide aimed, at least in part, at making states stronger candidates" for part of the $4 billion available for school reform from the economic stimulus package, Eric Roebelen of Education Week reports. Examples: Tennessee might evaluate teachers partly on student test results, and Alabama might get charter schools. Both ideas have stirred opposition. Some states have already implemented changes, hoping to get a funding boost as they face more budget cuts. (Read more)
Written by Al Cross Posted at 12/24/2009 06:52:00 PM No comments:

For most of the time since the banking crisis hit, more than a year ago, the Institute for Rural Journalism and Community Issues has encouraged community newspapers to report on the health of their community banks, using easily available public information gathered by federal regulators and public-interest organizations. We have no idea how good the coverage has been nationwide, but we think it would be hard to beat what we've seen this week in The State Journal of Frankfort, Ky.

First the newspaper reported that the leading bank in town, Farmers Bank & Capital Trust Co., plans to start repaying the $30 million it borrowed from the Troubled Asset Relief Program, and that its non-performing loans increased from $29 million to $44 million over a six-month period earlier this year, according to the Securities and Exchange Commission. Reporter Paul Glasser also cited a recent report by the bank to the Federal Deposit Insurance Corp., revealing that it lost money in September, after making $4.3 million in September 2008.

Those are the kind of figures that could make depositors worry about the solvency of their bank. The newspaper confronted those fears and figures in an editorial (accompanied by a cartoon), saying, "This doesn’t mean the local bank, or its holding company, is on the brink of failure. Most failed institutions are said to have troubled asset ratios of 100 percent." But the editorial also noted that the bank plans to sell stock to repay TARP "at the risk of diluting current shareholders," that the Investigative Reporting Workshop of the American University School of Journalism reported the bank's troubled assets rose to by more than a fifth this year, and its "troubled asset ratio" was 36.9 percent in September, far above the national average of 14.1 percent. And it went back to the start of TARP, noting that the “Treasury Department insisted the loans were not bailouts of participating banks, merely a helping hand to get sound institutions through tough times. But ProPublica, a nonprofit group of investigative journalists, said some of the banks 'have turned out to be not so healthy.'”

The editorial continued relating the local situation to the national, saying the bank "is in the same predicament as its customers: Even though some economists say the recession is over, the recovery is too weak to make anyone feel especially secure. [It] finds neither businesses nor individuals are in the mood to borrow much money, which inevitably depresses the bank’s revenue outlook," the editorial continues. "If Americans really have resolved to reduce their indebtedness, that’s not a bad thing. Farmers Bank was established in an era of fewer consumer goods when people found it prudent to borrow only if they really needed to, and vigilant bankers kept them from diving in over their heads. It’s past time for financiers, and the rest of us, to rediscover the proven wisdom of living within our means."

That's a frank and helpful look at a town's most powerful financial institution, by a newspaper that has a circulation of only 8,000 and is often considered the "local little sister" to metropolitan papers in Louisville and nearby Lexington. While Frankfort is the state capital, it is not metropolitan; it has a population of only 27,000 and a county population of fewer than 50,000, so The State Journal is still very much a community newspaper. It's owned by Ohio-based Dix Communications and makes its edtorials available online only to subscribers, but Opinion Editor Ron Herron has graciously alllowed the pertinent editorial page to be posted on the Institute site, here.
Written by Al Cross Posted at 12/24/2009 09:10:00 AM No comments: 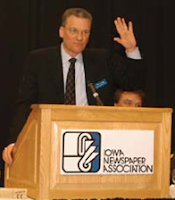 Bill Monroe of the Iowa Newspaper Association, one of the best and longest-tenured state newspaper association executives, is retiring after 29 years. He will be succeded by Chris Mudge, who has been assistant director.

In this week's INA Bulletin, Monroe writes that the association is a national leader because its 250 or so newspapers are almost all community papers: "Perhaps because there is no Top 50 market newspaper in Iowa, our members are more alike than they are different from one another. They know they can accomplish much working together. . . . They are willing to contribute to a foundation which, in turn, provides them with top quality training at a very affordable cost."
INA probably has the most extensive training program of any state newspaper group. "Our Foundation is the leading state press association foundation, having raised more money in the past three years than any other and exploding the programming options for our members," he writes. We're glad to provide an amplifier as Bill toots the INA horn. Best wishes in retirement, Bill.
Written by Al Cross Posted at 12/23/2009 10:28:00 AM No comments:

Bruised by the health care debate and worried about what 2010 will bring, moderate Senate Democrats are urging the White House to give up now on any effort to pass a cap-and-trade bill next yearThe prospect of a final vote on health-care reform early in 2010, and the failure of the Copenhagen climate summit to produce anything close to a binding or global agreement, make it unlikely that the Senate will join the House in passing climate-change legislation, several observers have opined this week. The latest is electric-industry reporter Liam Denning of The Wall Street Journal.

"Selling even a multi-lateral settlement to Americans was going to be difficult in the wake of the 'Climategate' revelations throwing doubt on the science of global warming," Denning writes. "Unilateral legislation ahead of next year's mid-term elections now looks all but impossible. Meanwhile, the alternative route of having the Environmental Protection Agency regulate carbon emissions as pollutants would likely provoke strong legal challenges." (Read more)

UPDATE, Dec. 24: Not just legal challenges, the Journal's Ian Talley writes:. "As part of a deal on a bill to increase the nation's debt limit, Majority Leader Harry Reid (D., Nev.) will allow the GOP to submit a controversial amendment to temporarily suspend new emissions regulation. The agreement was reached late Tuesday. . . . A similar amendment wasn't allowed to come up for a vote earlier this year. Capitol Hill pundits say the majority leader likely feared Republicans might win the vote, with many Democrats also expressing concern about proposed greenhouse-gas regulations." (Read more)

UPDATE, Dec. 27: "Bruised by the health care debate and worried about what 2010 will bring, moderate Senate Democrats are urging the White House to give up now on any effort to pass a cap-and-trade bill next year," reports Politico's Lisa Lerer. She writes that the wary Democrats number "at least half a dozen" and include Evan Bayh of Indiana, Mary Landrieu of Louisiana, Ben Nelson of Nebraska and Kent Conrad of North Dakota. (Read more)
Written by Al Cross Posted at 12/23/2009 09:21:00 AM No comments:

Heartland Publications LLC, publisher of about 20 daily newspapers, 30 weeklies and other mostly rural publications, "filed for Chapter 11 bankruptcy protection on Monday after agreeing with its major lender on a plan to cut the company's debt load by more than half," The Associated Press reports. "The company said the newspapers — in Georgia, Kentucky, North Carolina, Ohio, Oklahoma, South Carolina, Tennessee, Virginia and West Virginia — would continue operating as usual." For a Wall Street Journal story by Jacqueline Palank, click here. For Heartland's own story, click here. For a list of Heartland's papers by state, with frequency and circulation data, from the Editor and Publisher Yearbook and the Institute for Rural Journalism and Community Issues, click here.
Written by Al Cross Posted at 12/22/2009 11:04:00 AM No comments:

The Senate health-reform bill "would increase Medicare payments to hospitals and doctors in any state where at least 50 percent of the counties are 'frontier counties,' defined as those having a population density less than six people per square mile," Robert Pear reports for The New York Times. "The Congressional Budget Office has determined that Montana, North Dakota, South Dakota, Utah and Wyoming meet the criteria." (Read more)

Other winners, as well as losers, are tallied in a list from The Associated Press. For interactive, side-by-side comparisons of the Senate bill with other versions, from the Kaiser Family Foundation, click here. UPDATE, Dec. 23: Differences in the House and Senate bills may be hard to reconcile, writes the Los Angeles Times' Janet Hook, who knows Congress like the back of her hand. UPDATE, Dec. 24: Here's the latest example of that.
Written by Al Cross Posted at 12/21/2009 11:08:00 AM No comments:

2 looks at mountaintop removal: Fear of violence between sides partly animated by religion

Vicki Smith of The Associated Press notes that protesters on both sides in West Virginia have been charged with battery and writes: "Both sides are fighting for a way of life. The miners see the mountains as their livelihood. The environmentalists see them as divine and irreplaceable creations."

Peter Smith of The Courier-Journal reports from Kentucky: "Beneath Appalachian mountains wreathed in mist, dozens of religious leaders gathered to decry a mining practice they see an as affront to both God and nature ... but ... at First Baptist Church in Pikeville, a congregation replete with miners and those in coal-related businesses ... say they 'thank God we've got the coal.' . . . Both sides ... speak of a spiritual duty to strike a balance between jobs and nature, but they see that balancing point at different places.”
Written by Al Cross Posted at 12/20/2009 11:09:00 AM No comments: 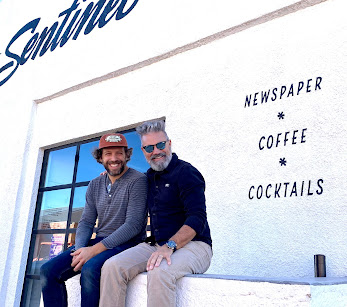