The Rural Computer-Assisted Reporting program was created by Daniel Gilbert, a reporter for The Wall Street Journal, with money he won for stories in the Bristol Herald Courier that exposed how energy companies and the Commonwealth of Virginia had cheated landowners in southwest Virginia out of mineral royalties. The series won the Pulitzer Prize for Public Service, and the Scripps Howard Award for Community Journalism, which carried a $10,000 prize. Gilbert donated the money to the Institute for Rural Journalism and Community Issues at the University of Kentucky to create an endowment that finances fellowships to the Investigative Reporters and Editors computer-assisted reporting boot camp, where he gained the skills that enabled him to do the series. The Scripps Howard Foundation matched his gift, and the Commonwealth of Kentucky matched both gifts as part of its Research Challenge Trust Fund for universities. Separately, the Ethics and Excellence in Journalism Foundation funded two mini-boot CAR workshops for rural reporters.

Reporter 'makes it click' with database skills from conference

Jeff Sturgeon, a reporter for The Roanoke Times, used skills he learned at a conference on computer-assisted reporting to detail in a series of stories how nearly half the deaths of unbuckled drivers in Virginia, especially those in rural areas, could have been avoided. 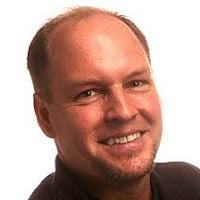 Through research and the use of data and graphs, Sturgeon made a compelling case for seat belt use. Using personal stories and statistics, he provided readers with a personal glimpse into how failure to use a seat belt has impacted people's lives.

He found one of the greatest disparities among drivers of pickup trucks, only 60 percent of whom use seat belts in rural areas. The statewide rate for all drivers is 82 percent. Extrapolating the data, he concluded that of the 1,700 unbuckled drivers who died in Virginia from July 2007 to June 2012, at least 600 could have been lived.

The conference he attended was held by Investigative Reporters and Editors and the Institute for Rural Journalism and Community Issues, with funding from the Ethics and Excellence in Journalism Foundation at East Tennessee State University in Johnson City. Another was held last year at the University of Kentucky, where the institute is based.

Here, the reporter tells how he wrote the "Make It Click" series.

In the summer of 2011, Virginia posted a statewide seat belt usage rate of 82 percent. In the lengthy annual seat belt survey, Carole Tarrant, editor of The Roanoke Times, found a detail likely to interest the paper’s readership: Southwest Virginia, where the paper is based, posted a subpar, regional belt-use rate of 76 percent. People in pickups in the southwest region scored close to 60 percent.

Carole assigned me, as transportation reporter, to research and prepare a series. I knew I needed crash data first. I obtained five years of traffic fatality data by locality and belt status -- whether the dead person was belted or unbelted. I placed these in a spreadsheet. I wanted to know what share of traffic fatalities in each locality were unbelted.
The results were alarming. While half of people killed in wrecks in the United States are unbelted, the unbelted represented 65 percent, even 75 percent, of traffic deaths in some Southwest Virginia communities. I gave the raw data to another reporter with data skills. He got the same results, so we felt sure about our mathematical conclusions.

To put a face on the story, I pulled names from newspaper crash stories, focusing on those in which police said the decedent was not wearing a seat belt. Police routinely release belt status around here. I called families seeking interviews, a photo of their loved one and permission to include him or her in a news report focused on the severe risks of unbelted vehicular travel. In the end, the package included mini-profiles of 11 people who died unbelted. The families of 15 to 20 others declined to participate.

The state motor vehicle department released several crash reports prepared by police, though in the middle of the project revised its redaction policy to blank out everything except the name of the driver and any passengers and the date, time and place of the wreck. Previously, the department had released entire crash reports including a diagram and narrative by an officer and the seat belt status, ejection status and an injury code for all involved, but redacted all occupant names (which had not been especially limiting because we typically received driver names from police anyway). The department said the change occurred because it discovered language in the state code it had not known about.

We wrote main stories focused on the data; local, seat-belt education efforts; a town where police strictly enforce the belt law; the background of the belt law in Virginia, which is subject to secondary enforcement; and on riding unbelted as a facet of rural culture. Writers were Mike Sluss, Zach Crizer and Jeff Sturgeon. 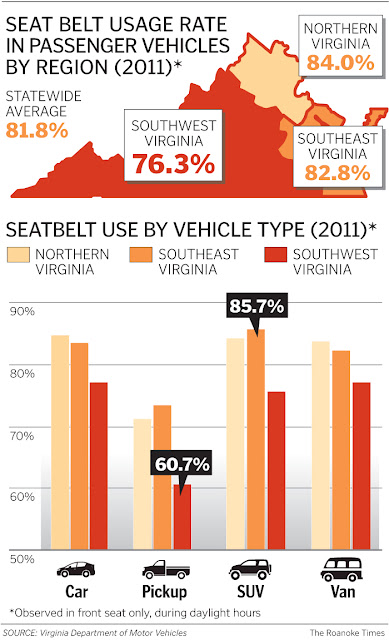 "It is remarkable how the internet and the latest technology has changed the field of reporting, and for the better. Instead of racking their brain over dust-worn manuscripts, reporters can easily access the old records online. Interviews can be conducted via email or whatnot. As is shown in the article, this 'rural computer-assisted reporting' truly seemed to have reinforced your case for the importance of seatbelts in preventing the rural road accidents. We're stepping into the future after all, which revolutionizes many of our traditional methods. Cool, right?"