Students are gaining valuable experience covering real-world issues and communities in courses taught at the University of Kentucky by Al Cross, the director of the Institute for Rural Journalism and Community Issues.

As an Extension Title faculty member, most of Cross’s work is directed away from the campus, but he teaches courses as an assistant professor in UK’s School of Journalism and Telecommunications.

In the fall, he teaches Community Journalism, which he says is more difficult to practice well than metropolitan journalism, because journalists’ professional careers more often come into conflict with their personal lives. He drives that point home by making students’ first outside assignment a story about a community of which they are a member.

Sometimes those stories gain an audience beyond the classroom. In fall 2009, horsewoman Jennifer Whittle produced a story about Kentucky programs to help non-racing breeds and some problems that had arisen, such as abuse of walking horses. Her article became the lead story in the Farmer’s Pride, the independent, statewide newspaper for Kentucky agriculture.

The major, final assignment for students in the course is a research project on a community media outlet, company, market or phenomenon. That usually culminates in an article that could be published in a Kentucky Journalism Review, a publication that Cross would like to see started one day.

In fall 2005, student Laura Clemmons profiled Paducah-based Paxton Media LLC, the largest media company based in Kentucky, and her story was reprinted in the Kentucky League of Cities’ City magazine in 2007 as a sidebar to Cross’s article about the ownership, audience and other key features of Kentucky’s news media.

Three students from Charles Sturt University in Australia have taken the course and conducted research that led to nationally presented papers by the Institute, including a detailed examination of Kentucky papers’ editorial pages.

Students in the Community Journalism course also help cover the town of Midway, halfway between Lexington and Frankfort, to maintain a project that Cross started in the spring semester of 2008, around an advanced-reporting course, Online Community News Site. 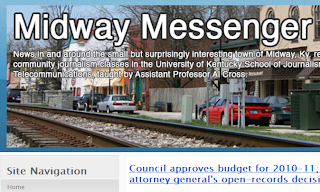 Midway has fewer than 2,000 people, but it is fertile ground for student journalists because it is surrounded by some of the world’s best Thoroughbred horse farms; has a vibrant, tourism-oriented business community; and is the scene of much concern about land use, development, zoning and economic development.

Students in the course write all kinds of stories for the Midway Messenger, a website and blog, including coverage of local government, especially the Midway City Council. In spring 2009, Messenger stories questioned how the proposed city budget was drafted. In spring 2010, when the mayor referred at a council committee meeting to a proposed budget he had given the council, student Heather Rous asked for copy of the budget and was denied. Through the Kentucky Press Association, the Messenger appealed the denial to the state attorney general, whose opinions in open-records matters have the force of law. Overruling the mayor and two previous decisions of his office, Attorney General Jack Conway ruled that the proposed budget was an open record because the mayor had given it to the council.

The spring 2010 class also gave students the opportunity to work with weekly newspapers in Appalachia, thanks to a grant the McCormick Foundation made to spur use of the Internet and multimedia by rural weeklies.

In 2005, the spring course was “The Future of Tobacco and Tobacco-Dependent Communities,” prompted by the 2004 repeal of the Depression-era federal program of tobacco quotas and price supports, a major key to maintaining a culture of small farms, especially where burley tobacco is grown. Kentucky is the leading burley state.

The work has included collaboration with students at the University of North Carolina-Chapel Hill, comparing how the nation’s top two tobacco states spent money earmarked for agriculture from states’ settlement with cigarette manufacturers.

Students examined Kentucky spending and found evidence that the money was being spent too loosely. The state tightened its oversight of the program.