Phil Everly, influential harmonist and songwriter of early rock, and country too, dies at 74

Phil Everly, who with his brother Don made harmonies that influenced a generation of rock, country and folk musicians, died today in Burbank, Calif., of chronic obstructive pulmonary disease, his wife Patti told the Los Angeles Times. A lifetime smoker, he was 74.

The Everly Brothers "charted nearly three dozen hits on the Billboard Hot 100 singles chart [and] were among the first 10 performers inducted into the Rock and Roll Hall of Fame when it got off the ground in 1986," Randy Lewis writes for the Times.

They are also in the Country Music Hall of Fame, note Greg Botelho and Todd Leopold of CNN. "Their style -- a product of their blend of rock 'n' roll with Appalachian folk, bluegrass and other genres more closely aligned to their Kentucky roots -- helped them earn inductions in both."

Phil, by two years the younger brother of Don Everly, was born in Chicago, but his roots were in Muhlenberg County, Kentucky, where their father, Ike Everly, was a contemporary of fellow singer-guitarist Merle Travis and Mose Rager, who taught Travis the thumb-picking style popular in the West Kentucky Coal Field. The boys sang with their father and mother, Margaret Embry Everly, on a radio show in Shenandoah, Iowa, in the 1940s, and later moved to Indiana, Knoxville and Nashville.

Ike Everly's regular trade was barbering, and one of his customers was Boudleaux Bryant, who had moved to Nashville with his wife Felice to pursue their joint songwriting career. When the brothers signed with Cadence Records in 1957, with the help of Chet Atkins, the Bryants offered them three duet songs: "Bye, Bye, Love," "Wake Up Little Susie," and "All I Have to Do Is Dream." The rest is history.

The brothers' singing and songwriting careers faded in the 1960s and they split up when Phil smashed his guitar and walked off stage in 1973 after Don showed up drunk. They reunited a decade later with a concert at London's Royal Albert Hall after Phil's solo album, Phil Everly, had done well in the United Kingdom. They did a reunion concert for HBO. They continued solo work, and Phil often collaborated with other musicians. The brothers sang backup on Linda Ronstadt's 1974-75 version of "When Will I be Loved," written by Phil for the brothers in 1960.

"They had that sibling sound," Ronstadt told the Times. "The information of your DNA is carried in your voice, and you can get a sound [with family] that you never get with someone who’s not blood related to you. And they were both such good singers -- they were one of the foundations, one of the cornerstones of the new rock 'n' roll sound." (Read more)

"The roots of the Everly Brothers are very, very deep in the soil of American culture," Paul Simon wrote for Rolling Stone's "100 Greatest Artists of All Time," on which they were No. 33. "The Everly Brothers' impact exceeds even their fame. They were a big influence on John Lennon and Paul McCartney — who called themselves the Foreverly Brothers early on — and, of course, on Simon and Garfunkel." Rolling Stone called them "the most important vocal duo in rock."
Written by Al Cross Posted at 1/03/2014 11:29:00 PM No comments:

"The gulf between [a] nostalgic view of rural North Carolina and a growing animal-welfare movement in a state increasingly removed from its agricultural past seems to be widening," Craig Jarvis reports for the News & Observer in Raleigh. "Traditional agricultural interests say they are trying to be responsible farmers in how they treat livestock and poultry, as well as how they treat the environment. Still, they see the Humane Society[of the United States] as public enemy No. 1, and have been girding for a fight for years."

The Humane Society has bought "graphic ads on the outsides of Raleigh city buses attacking 'Big Pork' for its use of gestation crates, in which sows are restrained nearly motionless during breeding," Jarvis reports. In the last legislative session, the group "argued for a puppy-mill bill and against a farm industry-backed bill that would have made undercover investigations of farming practices illegal, except for law enforcement officers. . . . Agriculture has also organized to counter what it sees as an emotional campaign by the other side that is not based on facts."

Roberta Wall of Greensboro, who in 2010 won passage of a bill that increased penalties for animal abuse, told Jarvis, “It’s the first time in the history of North Carolina that animals have had a voice.” The legislature and the governorship went Republican in 2012, but the governor's wife gpot the House to pass the puppy-mill bill. “Animal welfare issues are not Republican or Democrat[ic],” Wall said. “They are not party issues. That’s not what this is about. We’re just mainstream people. I’m not radical.” (Read more)

UPDATE: "Five years before a train loaded with crude oil derailed and exploded last year in Quebec, killing 47 people, another derailment in Oklahoma should have given federal regulators an early warning that the type of oil both trains carried was more flammable than authorities realized," Curtis Tate reports for McClatchy Newspapers.


Read more here: http://www.mcclatchydc.com/2014/01/02/213412/despite-reports-response-slow.html#storylink=cpy
The federal Pipeline and Hazardous Materials Safety Administration announced today that "Crude oil produced in North America’s booming Bakken region may be more flammable and therefore more dangerous to ship by rail than crude from other areas," Angela Greiling Keane and Mark Drajem report for Bloomberg News. PHMSA said on its website that it "is reinforcing the requirement to properly test, characterize, classify, and where appropriate sufficiently degasify hazardous materials prior to and during transportation." 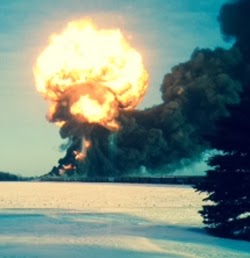 The agency had studied the issue for four months, after the catastrophic derailment of an oil train in Quebec, and announced its preliminary conclusion "three days after a BNSF Railway Co. train carrying oil caught fire after a collision in Casselton, N.D.," the reporters note. (Photo by Valley City Times-Record) "The North Dakota accident is the fourth major North American derailment in six months by trains transporting crude. Record volumes of oil are moving by rail as production from North Dakota and Texas pushes U.S. output to the most since 1988 and pipeline capacity has failed to keep up. . . . About three-quarters of the oil produced in North Dakota is shipped by rail rather than pipeline."

The train that derailed in Quebec was carrying crude oil from the Bakken shale formation in northwestern North Dakota and eastern Montana. Canada's Transportation Safety Board said it should have been labeled as a middle-hazard crude (PG II), not lower-hazard (PG III). "PHMSA announced that it was establishing new rules for fuel shipments in September. That agency and the rail-safety regulator are also considering a rule to require stronger tank cars. The proposal has the rail industry’s support and is being challenged by the shippers that own or lease the railcars," Bloomberg reports.

"The energy industry has been reluctant to discuss publicly what might be causing the problem," Russell Gold and Lynn Cook report for The Wall Street Journal. "It is possible, experts say, that unusually large amounts of naturally occurring and highly flammable petroleum products such as propane and ethane are coming out of the ground with the Bakken crude. Last March, Tesoro Logistics LP reported the Bakken crude it was transporting by rail was increasingly volatile.

"Another possibility is that impurities are being introduced during hydraulic fracturing, or fracking. That process involves pumping chemicals or other additives along with water and sand into a well to free more fossil fuels. One such additive is hydrochloric acid, a highly caustic material, which federal investigators suspect could be corroding the inside of rail tank cars, weakening them. Oil from fracked wells can also be laced with benzene and other volatile and highly flammable organic compounds." (Read more)

But there also may be something different about the oil. "In New Town, N.D., where the ill-fated [Quebec] train was loaded with Bakken crude, locals like to boast that the honey-colored oil is so light they can take it right from the well and pour it into truck engines because it requires little refining," Jacquie McNish and Grant Robertson report for The Globe and Mail of Toronto.
Written by Al Cross Posted at 1/02/2014 10:30:00 PM 1 comment: