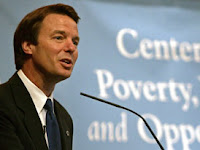 "A controversial war rages abroad, having claimed the lives of thousands of American troops. In the White House, an increasingly unpopular president limps to the end of his term. And out in some of America's poorest precincts, a telegenic candidate who hopes to replace him calls on the nation to put an end to poverty. Bobby Kennedy in 1968? Yes, and consciously echoing him this week, John Edwards in 2007," writs Richard Allen Greene of Politico.com, the new, well-staffed, Washington-based Web site for political news.

We're not usually in the business of quoting ourselves, but think in this case to refrain would be hiding our little light under a bushel, so here's a section of Greene's story:

Al Cross, the veteran Kentucky political writer who now heads the Institute for Rural Journalism and Community Issues at the University of Kentucky, said there could be political capital in the poverty tour, which Edwards is calling "The Road to One America."

"This is not about Appalachia, it is about all the poor regions of America: the black belt, the Rio Grande, the small towns of the Great Plains that are emptying out. He is trying to tap into the part of the base that is still sensitive to these social equality messages," Cross said.

Edwards is not polling noticeably better among poor people than he is among Democrats at large, according to a recent Washington Post-ABC survey, which showed him at 10% support in Democratic and Democratic-leaning households with incomes below $20,000. Hillary Clinton drew 55% and Barack Obama 20%.

Cross dismissed that result as meaningless: "You can't put any stock in national polling of poor people. Poor people have got a lot of other things to worry about other than an election more than a year away."
For the rest of Greene's article, and some uninhibited comments from readers, click here. For a look at advance stories and editorials from the Appalachian stops on Edwards' tour, go to The Rural Blog for Saturday, July 14.
Written by Al Cross Posted at 7/15/2007 11:40:00 AM