The pay gap between rural and urban workers has often been explained by differences in education, but new research shows that is an incomplete explanation. In fact, the gap is greatest for rural residents with college and advanced degrees, says the Economic Research Service of the U.S. Department of Agriculture In 2006,the average non-metro worker earned $602 per week, while the average urban worker earned $753 per week. That 23 percent difference is about more than education.

"Yes, average educational attainment in rural counties is lower than in the cities," reports the Daily Yonder. "But even if those differences were leveled, that would not get rid of the rural/urban disparity. At best, it would narrow the 2006 gap about $31 a week — only about a quarter of the rural/urban gap." 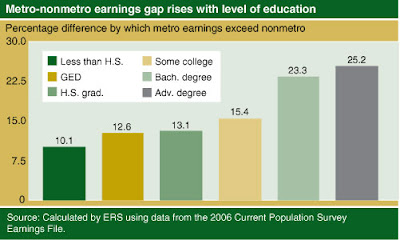 The gap is illustrated in the Yonder chart above, which shows that rural workers with high-school diplomas earn 13 percent less than their urban counterparts, while rural college graduates and those with advanced degrees (law, medicine, etc.) earn 23 and 25 percent less, respectively.

"It's easy to see all kinds of incentives in the current system that put rural counties at a disadvantage," the Yonder says in its non-bylined story. "It makes sense for college graduates to move from rural areas to urban counties so that they can make more money. Those with high school diplomas or less might find it advantageous to move to rural areas, where the cost of living is lower and the pay cut is less dramatic. Further, for young people growing up in rural areas who want to remain, there is less of an economic incentive to earn college degrees."

One of the unintended consequences of improving schools, however, may be an increased "brain drain." ERS authors Lorin Kusmin, Robert Gibbs and Timothy Parker write, "Efforts to raise local education levels, including encouraging young people to attend college, may be blunted by the outmigration of many of those who do earn a college degree. (Read more)
Written by Tim Wiseman Posted at 3/04/2008 10:36:00 AM