Transportation Secretary Ray LaHood returned a favor Friday, calling the largest newspaper in the Southwest Virginia district of Democratic Rep. Rick Boucher, left, to praise him for helping the Obama administration's climate-change bill through the House Energy and Commerce committee. "I want to give a shout out to Rick Boucher," LaHood said. "It was unclear going into the hearings how Rick was really going to vote on this. His support means a lot to the administration."

Reporter Mason Adams' story this began way: "No one in The Roanoke Times newsroom could remember a time that the White House called, unsolicited, to offer comment. That happened on Friday morning, sending several signals: There is a new media relations/political strategy on Pennsylvania Avenue, and the American Clean Energy and Security Act of 2009 is a big deal." And that is especially true in a coalfield district like Boucher's. (UPDATE, May 24: LaHood also called The Courier-Journal of Louisville to praise Rep. Baron Hill of Southern Indiana, another Democrat who backed the bill, reports C-J Washington reporter James R. Carroll.)

Adams noted that the bill passed "based largely on compromises worked out by Boucher. He said he has spent the past several months working on one side with electric utilities, coal companies and the United Mine Workers, and on the other with committee chairman and bill sponsor Rep. Henry Waxman, D-Calif., to soften the bill into a version that might be able to win congressional approval. LaHood's call underscores Boucher's importance to the bill's chances of passing. It also emphasizes just how much the congressman from Abingdon has stuck his neck out for President Obama." (Read more) 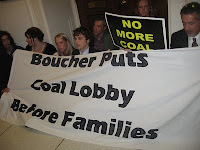 Too much, says the conservative From Oh High blog. "There is no clearer indication that Washington politicians know and appreciate the fact that Rick Boucher abandoned the people of Southwest Virginia to its fate and sided with environmental special interest lobbyists and tax enthusiasts," Jerry Fuhrman writes, saying the call was made "to try to cushion the blow that is surely -- and deservedly -- going to come down on him like. an avalanche." (Read more) Boucher is getting flak from both sides; in an earlier post, Fuhrman ran this photo of environmentalists protesting outside Boucher's office for his weakening of the bill.
Written by Al Cross Posted at 5/23/2009 09:55:00 PM