Child poverty rates are highest in the South, but are increasing in the Midwest and Northeast 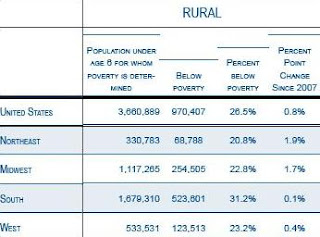 Almost one-third of children in the rural South lived below the poverty level in 2008 and the share of children in the rural Midwest and Northeast who are poor has increased significantly since 2007, Marybeth J. Mattingly reports for The Carsey Institute at the University of New Hampshire. A Carsey study suggests nearly one in five children under 6 in America lived below the poverty level in 2008, and in no region did the overall number of children in poverty decline from 2007 to 2008. (Carsey table; figures in last column are percentage points and should not have percent signs)

"Women in poverty are more likely to have babies of low birth weight, a correlate of later health problems, infant mortality, and more cognitive and emotional problems," Mattingly writes. While the study reflects changes from 2007 to 2008, Mattingly notes that the data cannot fully reflect the current recession, and when data from 2009 becomes available it will likely show an even bleaker picture for poverty among children.

Among rural children, 26 percent under the age of 6 lived in poverty last year, 31 percent in the South. The study also includes a state-by-state breakdown of children below the poverty level. Mississippi led all states with a 35 percent child poverty rate, followed by Kentucky at 28.9 and Louisiana at 28.8 percent. Connecticut had the lowest rate at 10.6 percent. (Read more)
Written by Jon Hale Posted at 9/30/2009 11:11:00 AM