Building community health centers for all Americans is the key to reforming the health care system, Michael Fine, the top-ranked family physician in Rhode Island and a former doctor in rural Tennessee, writes for the Daily Yonder. He says the proposed health reform seeks to insure more people instead of treat them; he says neither the public plan nor co-op plans being suggested have ever been tried in the U.S. and many people doubt either will actually work.

"On the one hand, people in rural America don’t have enough access to health insurance, high-tech hospitals, specialists, primary care doctors, emergency rooms, dentists, drug stores and other health services," Fine writes. "On the other hand, access to health insurance, hospitals, and so forth aren’t what make people healthy." Fine says the rich community life is the most important factor in keeping rural Americans well, adding the health care reform's impact on Rural America is a joke and "there is a huge contradiction between what we are considering, what we are likely to achieve, and what our legislation is actually likely to do."

Health insurance reform is likely to raise insurance prices for average Americans, Fine writes, and even subsidies for the poor will come in the form of tax breaks that return money only after families have spent it all year despite their limited budgets. Fine notes that more money is allocated in the reform bills to go to community health centers "Assuming that money stays on the table," he writes, "there is a chance people in rural America will get more of what they need, which is not more insurance, but more doctors, more dentists, and more of the health care that matters." (Rural Assistance Center map shows where more doctors are needed; click to see full-size version) 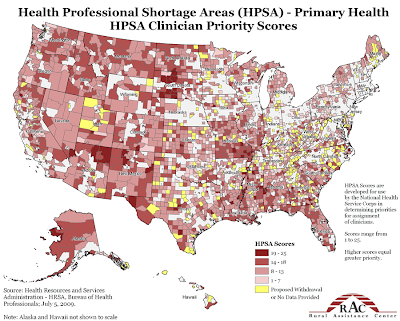