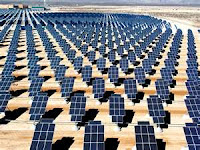 "The projects are supposed to generate about 4,200 megawatts of power, enough electricity to power nearly 2.8 million homes, and nearly 7,000 jobs, according to federal estimates. Does that outweight the impact on rare animals and plants on public lands?

No, says Janine Blaeloch, supporter of renewable resources and executive director of Western Lands, a non-profit group that examines the impacts of government-land privatization. "These plants will introduce a huge amount of damage to our public land and habitat," she told Matheny.

Other environmentalists like Johanna Wald, director of the Natural Resources Defense Council, support the solar projects and their potential to slow or halt climate change. "There's no free lunch when it comes to meeting our energy needs," she told Matheny. "To get energy, we need to do things that will have impacts."

With 11 major solar projects approved in California and Nevada last year and a dozen utility-scale solar projects already in the permitting pipeline in California, Nevada and Arizona, federal agencies could "open up 21.5 million more public acres to solar development in six Western states," Matheny reports, threatening wildlife, like the endangered desert tortoise, in the open deserts. The solution, some critics say, is to use "already-disturbed lands such as brownfield sites or former agricultural fields or even residential and commercial rooftops. (Read more)
Written by Deloris Foxworth Posted at 6/06/2011 04:22:00 PM

It would make more sense to put all those solar panels on rooftops of existing structures, close to where the electricity will be used and impacting no wild lands. Americans should think small and simple some times, not big and complicated. If every rooftop in the lower 48 states and Hawaii contained solar panels, tied to the grid that already exists, how much energy would that produce? And with no environmental impact to speak of.