The U.S. Postal Service says many rural post offices are in danger of closing because of its budget woes, but communities fighting to keep their offices open might want to pay attention to Hacker Valley, W.Va., where residents rallied to reopen their post office after it closed in 2009. They celebrated winning that fight this week in a ceremony complete with a "ribbon-cutting" of USPS packing tape, reports Rick Steelhammer of The Charleston Gazette. (Gazette photo: First customer at reopened office, Retha Casto, hands letter to its contractor, Cindy Miller)

The Hacker Valley Post Office closed under an emergency suspension order after its lease expired. The Postal Service told community members at a hearing that a survey revealed no suitable replacement sites, and one couldn't be built because of a USPS building freeze. Residents first heard of the closure at the hearing, but later learned the agency knew of closure plans several years before, which should have "given the agency adequate time to find an alternative site," they said.

Dozens of residents wrote letters to the Postal Regulatory Commission about "hardships" the community faced because of the closure, and asked it be investigated. The Commission concluded "the Postal Service is using its suspension authority to avoid the explicit congressional instructions to hear and consider the concerns of patrons before closing post offices." The Hacker Valley closing led to investigation of more than 400 closures of small post offices to make sure USPS hadn't illegally closed them.

The Postal Service announced last year it would allow a contract postal unit in Hacker Valley, 20 miles north of the county seat of Webster Springs. (MapQuest image) Contract units have no salaried postmaster, but offer all postal services except bulk mailing and passport applications. The CPU costs less than half to operate as the old post office. "I would hate to see any postmasters lose their jobs, but it seems like this approach is worth looking at in rural areas with bottom-line problems," said Renee Anderson, a member of the Hacker Valley Post Office Committee. The Webster County school board allowed the CPU to operate in the former Hacker Valley Elementary School cafeteria. (Read more) 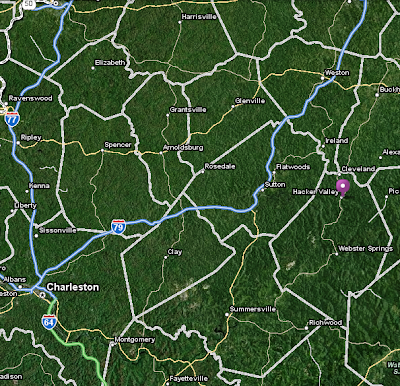