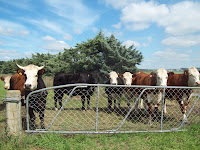 The South Dakota Stockgrowers Association sent out an alert this week saying that a provision that would ban packer ownership of livestock will be offered as an amendment to the 2012 Senate Farm Bill next week. The move rekindles a debate that the Obama administration thought it had ended last year, largely in favor of meatpackers, especially been producers. (Photo by Peter Alexander Robb)

The amendment is authored by Sen. Charles Grassley, R-Iowa, and Sen. Kent Conrad, D-N.D. The Daily Yonder reports that the amendment is backed by the Stockgrowers and by the Rancher-Cattlemen Action Legal Fund. It is opposed by the National Cattlemen's Beef Association. (Read more) According to the Stockgrowers, Grassley is offering his amendment to the full Senate because he lacked support in the Senate Agriculture Committee.
Written by Amy Wilson Posted at 5/25/2012 11:49:00 AM