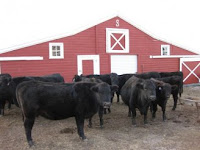 "Livestock on farms near oil-and-gas drilling operations nationwide have been quietly falling sick and dying," reports Elizabeth Royte for the Center for Investigative Reporting. Scientists don't yet know the exact cause, but many think fracking chemicals are poisoning livestock through the air, water and soil. The first ever peer-reviewed study suggesting a link between fracking and livestock death was published earlier this year. (Photo by Jacki Schilke: Her cows that she says got sick from fracking)

Veterinarian Michelle Bamberger and Cornell University professor Robert Oswald analyzed 24 case studies of farmers in six states where gas is produced and livestock "experienced neurological, reproductive and acute gastrointestinal problems after being exposed – either accidentally or incidentally – to fracking chemicals in the water or air," Royte writes. The article, published in New Solutions: A Journal of Environmental and Occupational Health Policy, "describes how scores of animals died" over several years, she reports.

In New Mexico, hair testing of sick cattle that grazed near well pads found petroleum residue in 54 of 56 cows. In Louisiana, 17 cows died after an hour's exposure to spilled fracking fluid. In Pennsylvania, 140 cattle were exposed to fracking wastewater. About half of them died, and the remainder produced 11 calves, only three of which survived. An overflowing wastewater pit in Pennsylvania sent fracking chemicals into a pond where pregnant cows grazed. Half their calves were stillborn.

The overall death total is "insignificant when measured against the nation's livestock population," Royte reports. But, environmental advocates say these animals' deaths are an early warning sign for human health. "Exposed livestock are making their way into the food system, and it's very worrisome to us," Bamberger writes in the article. "They live in areas that have tested positive for air, water and soil contamination. Some of these chemicals could appear in milk and meat products made from these animals." (Read more)
Written by Ivy Brashear Posted at 12/04/2012 01:03:00 PM

Thanks for sharing the valuable information. Livestock may be infected when they come into contact with wildlife. Insects carry some diseases from wild animals to livestock. It can also infect wild animals with some diseases. Signs seen in live cattle are enlarged lymph nodes, discharge from the eyes and nose, a whitish layer starting on the edge of the eye and growing inward, covering the eye. People can easily found that study links to livestock disease and death . Glad you found the article helpful!

Most Republicans still believe fraud elected Biden; the truth is out there, in an AP story that any weekly paper can run 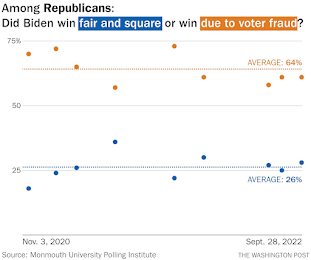