Social Security to tighten leash on disability judges, as their generosity threatens to sink program

Following scandals and highly questionable activity in its disability program, including some widely publicized cases in Central Appalachia and Puerto Rico, the Social Security Administration will give itself "more latitude to crack down on judges who are awarding disability benefits outside the norm," Damian Paletta reports for The Wall Street Journal. The problem may be more prevalent in rural areas; the rural disability-benefits rate is 80 percent higher than the national rate.

The rules governing the judges are being rewritten so that they will no longer have "complete individual independence," and will clarify that they are "subject to the supervision and management" of other officials in the agency, Paletta reports. "In 2011, The Wall Street Journal reported a widespread disparity in the probability that certain judges would award benefits" to people who appealed initial denials, with many awarding benefits to 90 percent of claimants and others denying more than 80 percent of their cases. The tried to crack down on such "outliers," but said the "judicial independence" rule kept it from intervening, "even if a judge paid benefits in more than 95 percent of the cases."

Paletta notes, "The Social Security Disability Insurance program, funded by payroll taxes, pays monthly benefits—often until someone receives retirement benefits in their 60s—for people who can no longer work because of physical or mental health problems. During the recent economic downturn, the program grew quickly and now has close to 11 million beneficiaries. It has grown so fast, in fact, that it is projected to exhaust the reserves in its trust fund by 2016, which could force all beneficiaries to see an immediate cut in their payments." 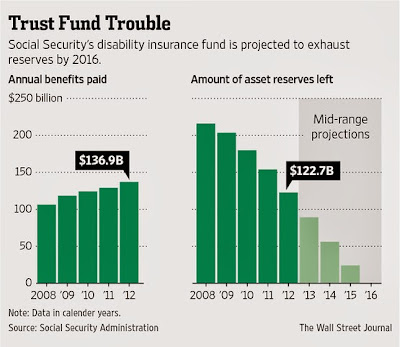