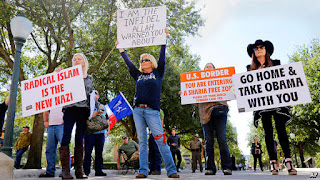 In the South—the nation's most rural region—"Islam is now the second-most-popular faith (behind Christianity) in every southern state except South Carolina (where, surprisingly, the Baha’i hold that accolade)," reports The Economist. "By one count, the region accounts for over a third of all the mosques in America."

"Muslims are drawn to the South for the same reasons as other newcomers, who in turn have helped to make parts of it, especially university towns such as Auburn, Alabama and Oxford, Mississippi, cosmopolitan and welcoming: the low cost of living, nice weather and professional and technical jobs," reports The Economist.

"Hospital scrubs are plentiful at Friday prayers at the Magnolia Islamic Centre in Madison, a suburb of Jackson," reports The Economist. "Tauqeer Yousuf, a doctor from Pakistan who is president of the local Muslim association, says some other residents at first tried to block the building but that 'the good thing about this country is that if you follow the rules, no one can stop you.' Another worshipper says Jackson’s religious climate compares favourably to Saudi Arabia’s. Extra police patrols safeguarded the community during Ramadan."

"Even amid current fears of terrorist asylum-seekers, many southerners are hospitable," reports The Economist. "The mayor of Clarkston in Georgia—where a mosque stands opposite a Buddhist centre and a halal butcher next to Good Times Country Cookin’—says his town is ready to accommodate more refugees. And even in Tennessee, scene of the fiercest resistance to mosque-building, the quietly tolerant outnumber the bigots."

The problem is the bigots far outweigh everyone else in volume, reports The Economist. "They include not just shock-jocks, Koran-burning cranks and small-town officials, such as the sheriff in Tennessee who recently described Islam as 'communism with a god' and worried that Muslims aimed to take over the country. Islamophobia is also widespread in mainstream southern politics, especially among Republicans. The South accounts for six of the ten states that have passed laws to prevent the application of 'foreign' (ie, sharia) statutes in court, a response to a threat that does not really exist: along with the construction of new mosques, the spectre of sharia is southern Islamophobes’ main theme."

The main targets are religion and race, hot button issues in a region that has a history of Christian ideals and slavery, reports The Economist. "The irony is that Muslims and southern conservatives are in some ways deeply compatible. It is not just the shared emphasis on hospitality. Both have old-fashioned family values and traditional attitudes to marriage." (Read more)
Written by Tim Mandell Posted at 10/01/2015 01:41:00 PM