To help combat the opioid epidemic among low-income residents, several states have been granted a waiver, or are seeking permission for a waiver, to "an obscure Medicaid rule that prohibits the use of federal dollars for addiction treatment provided in facilities with more than 16 beds," Christine Vestal reports for Stateline. California, Maryland, Massachusetts and New York have been granted waivers, while Arizona, Indiana, Illinois, Kentucky, Michigan, Utah and Virginia are seeking similar permission.

Of the estimated 22 million Americans who have a drug or alcohol addiction that needs treatment, only 10 million receive it, Vestal reports. The opioid epidemic killed 33,000 people in 2015, and the epidemic is especially problematic in rural areas and Appalachia. (Stateline map: Where Medicaid pays for longer addiction treatment or has been asked to) 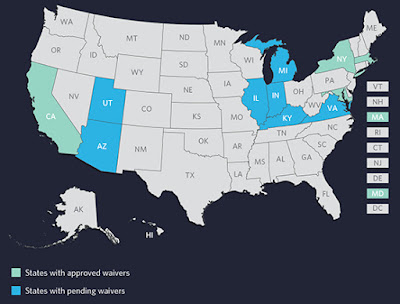 Tom Price, secretary of the Department of Health and Human Services, said in March that he "would continue the Obama administration’s waiver policies for residential facilities with 16 or more beds," Vestal writes. "The 16-bed provision was originally intended to discourage investment in what the 1965 Medicaid law called 'institutions for mental disease,' and to instead promote the expansion of smaller, community-based mental health and substance abuse centers."

Eliminating the 16-bed prohibition "means millions in new federal Medicaid dollars will flow to treatment centers that now rely on limited state and local grants," Vestal writes. "In addition to offering inpatient treatment to patients who need it, state Medicaid addiction programs must include all available addiction medications, intensive outpatient therapy, recovery support services such as job training and housing, substance abuse prevention programs, case management and physical health services. States also must prove that adding more residential treatment slots to the list of Medicaid treatment options will cost no more than continuing to prohibit it."
Written by Tim Mandell Posted at 4/05/2017 12:17:00 PM