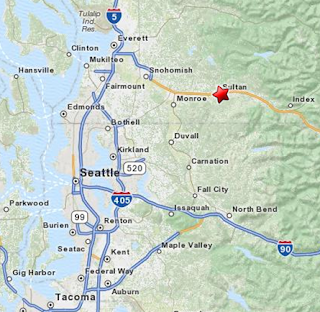 One Washington town is fighting its growing homeless population and those who provide services to it, providing an example of the special challenges of dealing with the homeless in rural areas.(MapQuest image)  Leaders of Sultan, 2000 census population 3,344, say the approximately two dozen homeless, many of whom hang around town during the day, "hurt business and tourism and give the town an unsavory feel," Lynn Thompson of The Seattle Times reports.

In recent months local law enforcement has stepped up efforts to issue trespass notices to homeless and arrest repeat offenders and  actively discouraged people who want to help them. "It's almost like they're making it illegal to be homeless in Snohomish County," Dave Wood, service director for Sky Valley Volunteers of America, which runs Sultan Food Bank, told Thompson.

Advocates say rural homelessness presents challenges that differ from urban areas: "There are few shelters or transitional housing outside of cities, fewer social-service programs or job-training opportunities, and a long commute to drug, alcohol and mental-health services," Thompson writes. Ken Stark, the county's human-services director, says "Smaller communities struggle because they don't have resources, but larger cities resent the assumption they should provide all the services and accept all the homeless."

Seven percent of U.S. homeless live in rural areas, which accounted for 20 percent of the 2000 population and rural communities that effectively address their homeless populations "get organized, use their resources in strategic ways and develop plans for each individual," Barbara Poppe, executive director of U.S. Interagency Council on Homelessness, told Thompson. Still, advocates say many small towns use the "Greyhound solution" by giving the homeless a bus ticket out of town. Local business owners have applauded Sultan's crackdown on the homeless, which police Chief Jeff Brand chooses to instead classify as "transients." (Read more)
Written by Jon Hale Posted at 4/05/2010 04:44:00 PM