Massey boss Blankenship gets profiled big time, but we've been following him for a while 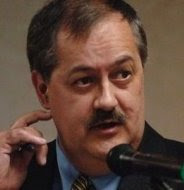 Massey Energy CEO Don Blankenship has been very much in the news since Tuesday's explosion at the Upper Big Branch Mine in Raleigh County, W.Va., but this isn't his first experience with national news media. Blankenship is "a man who has cultivated a larger-than-life reputation over the years as a fearless and combative businessman," Ian Urbina and John Leland of The New York Times write. David Montgomery and Dan Zak of The Washington Post add, "Now, at 60, Blankenship, a millionaire who grew up poor in coal country, is facing perhaps the greatest challenge of his career. As he directs his company's response to the tragedy at the Upper Big Branch mine, his pugnacious profile seems to have softened a bit."