Amid relief about debt bill's passage, states and localities wonder about impact on budgets 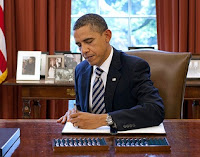 The bill that raises the national debt ceiling and calls for a projected deficit reduction of $917 billion over 10 years leaves many state and local governments relieved but worried about its impact to state budgets, John Gramlich and Melissa Maynard of Stateline report. (White House photo: President Obama signs the bill)
“We’ve always known that big reductions were coming,” Michigan budget director John Nixon said Monday. “Now, it’s just a matter of figuring out where they’re going to come and how quickly. But from a state-level perspective we’re thrilled to see a deal.”


Medicaid, the biggest expense item in many state budgets, is temporarily protected, but failure of a special congressional committee to meet the deficit-reduction goals will create an automatic reduction in Medicaid. Other possible cuts, states fear, may come in transportation and discretionary funds many states use for education, housing, criminal justice and community development. (Read more)
New York Times reporters Adam Nagourney and Michael Cooper got Americans’ reactions on the debt deal, here.
Written by Deloris Foxworth Posted at 8/02/2011 05:06:00 PM