Former Environmental Protection Agency officials are speaking out against the gas industry's claim that hydraulic fracturing poses no risk to drinking water, while the American Petroleum Institute defends fracking, saying the sole available example of contamination "was potentially caused by a malfunction," Ian Urbina writes for The New York Times. 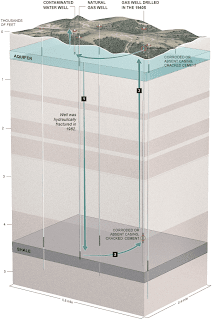 Carla Greathouse, lead author of a 1987 EPA report detailing the only publicly accessible, documented case of fracking contaminating drinking water, in Jackson County, West Virginia, speculates there could be others among many sealed legal documents. "I still don't understand why industry should should be allowed to hide problems when public safety is at stake," she told Urbina. "If it's so safe, let the public review all the cases." Dan Derkics, a 17-year EPA veteran, told Urbina, "I can assure you that the Jackson County case was not unique." It was reported in 1984, did not involve the use of chemicals used today, and at 4,200 feet the gas well was shallower than many modern wells. The contaminated water well was 400 feet deep. Perhaps most importantly, a nearby abandoned well, with faulty casing and cracked cement, may have been the conduit for the contamination. (Times diagram by Frank O'Connell and Haeyoun Park; for the full version click here)
Urbina writes, "Drilling technology and safeguards in well design have improved significantly since then. Nevertheless, the report does contradict what has emerged as a kind of mantra in the industry and in the government," that there are no documented cases. Researchers "were unable to investigate many suspected cases because their details were sealed from the public when energy companies settled lawsuits with landowners," Urbina writes. American Petroleum Institute spokesman Eric Wohlschlegel told him, "Settlements are sealed for a variety of reasons, are common in litigation, and are done at the request of both landowners and operators."
Though there have been many reports of fracked gas migrating into water wells, "Most drilling experts indeed have said that contamination of drinking water with fracking liquids is highly improbable," Urbina writes, but EPA is studying the risks. Fracking fluids contain carcinogends such as benzene, he notes. (Read more)
Written by Deloris Foxworth Posted at 8/03/2011 06:01:00 PM