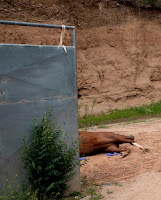 Twenty-four horses a week die at racetracks across the country, and many are inexpensive horses racing with little regulatory protection, a New York Times investigation discovered. Horses are euthanized and shipped to rendering plants or landfills, rather than kept for examination about why they broke down. (NYT photo by Jakob Schiller: Horse dumped in junkyard after a race injury and euthanasia)

After Kentucky Derby horse Eight Belles was euthanized on national television in 2008, Congress banned anabolic steroids in horses, but through analysis of more than 150,000 races, injury reports, drug-test results and interviews, the Times found that the industry is "still mired in a culture of drugs and lax regulation and a fatal breakdown rate that remains far worse than in most of the world." About 3,600 horses died racing or training at state-regulated tracks over the last three years. A Times interactive map highlights death rates in each state.

Trainers have more incentive to race unfit horses because of increased casino gambling, which raises purse sizes. Since 2009, trainers have been caught illegally drugging horses 3,800 times, the Times reports. During the same period, 6,600 horses broke down or were injured. The highest number of incidents in a single day happened on the day of the Kentucky Derby last year. Two horses fractured legs, and seven jockeys at other tracks were thrown after their horses broke down.

The Times found that horses in smaller, less publicized races have a 22 percent higher chance of injury or breaking down than those in higher-profile races. Race officials often hide breakdowns and refuse to disclose track accident rates. Five of the highest incident rates last year were in New Mexico, with the highest rate at Ruidoso Downs. In one race at Charles Town in West Virginia, seven of eight horses that started fell. Most incidents are linked to drug abuse in horses, with the most dangerous drugging coming from pain killers that mask pain and make it hard for experts to spot injury, the Times reports. (Read more)
Written by Ivy Brashear Posted at 3/26/2012 12:54:00 PM