UPDATES: Mississippi-based Emmerich Newspapers "decided to launch a thrice-weekly publication and hired all the former Leader-Call staff to operate it. To be called The Chronicle, the first publication date of the start-up is reportedly April 15," Arkansas Press Association Executive Director Tom Larimer reported in the Arkansas Publisher Weekly. (Read more) However, the Review bought the Leader-Call's name and subscriber list and revived the paper as a thrice-weekly on April 19. For the paper's account of that, click here. 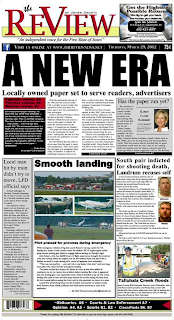 The Review of Jones County, Mississippi, a weekly newspaper, has loved to tweak its daily competitor, the Laurel Leader-Call, for being owned by a chain and making mistakes. This week it trumpeted victory, as the Leader-Call published its last edition.

The closed paper's stories about its demise were no longer available online, but a short story on the news service of its owner, Community Newspaper Holdings Inc., said "Publisher Mitchell D. Lynch advised the paper’s 18 employees of the decision Monday afternoon. He said subscribers who had paid for the paper in advance would be reimbursed."

The paper cut its frequency to four days a week from seven about six months ago. It was 100 years, seven months and 18 days old, starting as the Laurel Daily Argus, which changed its name to the Laurel Daily Leader. It became the Leader-Call in 1930. CNHI bought it in 1999. The Review of Jones County was established in 2007. For its site, click here. Laurel is about 30 miles northeast of Hattiesburg, on Interstate 59.
Written by Al Cross Posted at 3/29/2012 06:22:00 PM