With enrollment in state health-insurance exchanges four weeks away, the Census Bureau has just issued some very useful information for rural journalists: county-by-county figures, by age group, on Americans with and without health coverage. 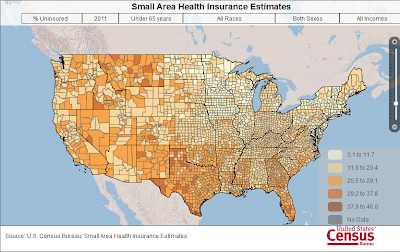 Even better than maps like the one above is an interactive tool that allows you to map and rank counties by various factors. A little clicking reveals that Esmeralda County, Nevada, probably has the highest percentage of children without health insurance, 32.2 percent. We must say "probably" because the small samples for each county create high error margins, in Esmeralda's case plus or minus 6 percentage points. It is followed by Sherman County, Texas, 28.3 percent; Aleutians East Borough, Alaska, 27.9; Briscoe County Texas, 27; and Garfield County, Mont., 26.7. Texas dominates the top 50.

The most important numbers are for all Americans under 65, who do not qualify for Medicare. Aleutians East leads with 46 percent uninsured, followed by four Texas counties: Hidalgo, Hudspeth, Presidio and Webb, all between 39 and 36 percent. The data are from 2011, the last year available; data going back to 2006 allow you to check trends among states during those six years. Here is an example of a statewide story, mentioning individual counties.

The data can also be sliced by income levels: less than 138 percent of the federal poverty line, the new eligibility threshold for Medicaid in states that have expanded it; and less than 400 percent of the poverty line, the threshold for subsidies for insurance policies that the exchanges will offer. And you can create your own state-by-state maps, suitable for publication. The Census site is here; the interactive tool is here. To get county data, limit the geography to a state and check the Show Counties box.
Written by Al Cross Posted at 9/02/2013 05:58:00 PM

In our country many of us have no proper Health Insurance.Obama care is necessary for US.Thanks for giving information about Obama care. Keep posting...