"First lady Michelle Obama on Monday blasted back at critics of her school lunch program, arguing parents should ensure their children eat healthy meals," Justin Sink reports for The Hill. Obama said in an interview with MSN, “If I let my kids dictate what we have for dinner every day, it would be French fries, chips and candy, but we don’t run our households like that, and we can’t run our schools like that. Our job as adults to make sure that our kids eat what they need, not what they want.” (Getty Images photo) 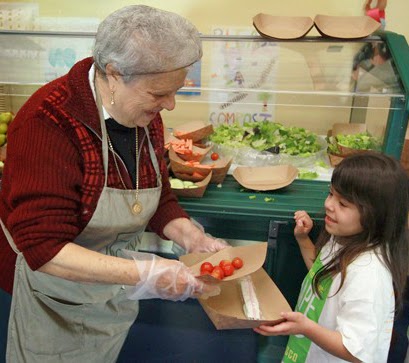 The House is expected vote this week on a Republican bill "that would waive tougher nutritional standards on school lunches if the school shows it has operated at a net loss over six months," Sink notes. Some school districts say they are losing money on meal programs because the standards, which limit sodium and require whole grains, fruits and vegetables, have made meals unpalatable to some students.

"The White House has backed a compromise agreement adopted by the Senate Appropriations Committee," Sink notes. "Under that deal, tougher requirements on sodium levels would not be implemented, although requirements for schools to offer fruits and vegetables would be kept." Obama said, “What we need to do is lend a hand to the schools that are struggling, not roll back the standards and say, ‘Oh, well. The kids don’t like it so let them eat cake.’ We can’t afford to do that.” (Read more)

At a Senate Agriculture Committee hearing last week, military leaders supported the standards as a way to strengthen military preparedness, Sarah Gonzalez reports for AgriPulse, a Washington newsletter. Retired Air Force General Richard E. Hawley said the military had to turn down 62,000 potential enlistees because of weight between 2006 and 2011, is discharging 1,200 troops per year because of weight issues, and spends $90 million a year finding and training replacements. (Read more)
Written by Melissa Landon Posted at 6/17/2014 07:11:00 PM