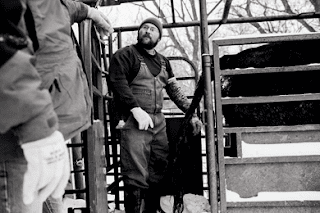 Large animal veterinarians are becoming scarce in the heartland, "as agribusiness changed the employment picture and people left the region," Ted Conover reports for Harper's Magazine. "Many vets simply close shop when they retire; private practice is too hard a way to make a living. Meanwhile, the U.S. Department of Agriculture’s Food Safety and Inspection Service has become the nation’s largest single employer of vets, most of whom work in meat and poultry plants, where they oversee not animal husbandry but slaughter." (Iowa veterinarian Zach Vosburg talks with the owner of a cow during a pregnancy check)

"Today’s vet-school grads, about 80 percent of them women, head overwhelmingly to jobs in cities and suburbs, to work with pets," Conover writes. The main reason is that "fees aren’t tied to the market value of the animal; people spend more on critters that share their homes. With food animals, a farmer’s decision to summon the vet necessarily involves a calculation of profit and loss. In addition, the hours are better for an urban vet. A large-animal practitioner is usually on call twenty-four hours a day, seven days a week—and typical days involve a lot of highway driving."

Another problem is cost, Conover writes. When vet Zach Vosburg wanted to buy the north-central  Hampton Veterinary Center where he worked, he was facing student loan debts of almost $100,000. He gained some relief in 2013 after being awarded $75,000 from the USDA’s Veterinary Medicine Loan Repayment Program, which "pays off $25,000 of debt each year for three years if a practitioner relocates or extends his practice to an underserved area. To meet these guidelines, Vosburg agreed to serve the residents of Butler County, just east of Franklin County, where his clinic is located."

The clinic is a mixed-animal practice, Conover writes. Vosburg told him, “Anything can walk through that door." Vosburg treats household pets year round, "but a surge of farm work begins in the fall, when cattle need vaccinating and preg checking, and continues through the spring, when cows calve, horses foal and goats kid."
Written by Tim Mandell Posted at 9/23/2015 01:46:00 PM