Fracking operations on University of Texas System lands in West Texas have spilled at least 1.6 million gallons of oil, saltwater and other pollutants from wells and associated equipment since 2005, says a report released today by the Austin-based Environment Texas Research & Policy Center and the Frontier Group, based in Santa Barbara, Calif., Ralph K.M. Haurwitz reports for the Austin American-Statesman. 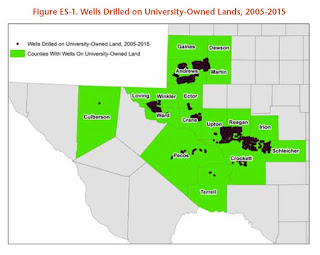 The report, based on Texas Railroad Commission records, says "vast quantities of methane have been released by the 4,132 wells drilled since 2005" that were subjected to hydraulic fracturing "in which huge amounts of water, sand and chemicals are injected under pressure to create fractures in rock that coax oil and natural gas out of the ground," Haurwitz writes. (Environment Texas and Frontier Group map)

"Annual royalty payments and other proceeds from companies that lease mineral rights from the UT System increased 400 percent since 2006 to a record $1.1 billion last year, owing in large part to fracking and horizontal drilling techniques that have unlocked resources once thought out of reach," Haurwitz writes.

Mark Houser, CEO of the UT System’s University Lands Office, said in an emailed statement that he has not seen the report but that "University Lands has numerous provisions in place to protect the natural resources and to ensure that companies developing these resources are compliant with the environmental protections and the regulations developed by the Texas Railroad Commission, Texas Commission on Environmental Quality and other state and federal regulations." (Read more)
Written by Tim Mandell Posted at 9/08/2015 01:14:00 PM