Cost gap between humans and machines shrinking, meaning robots could be farming

Robots could soon replace human labor on farms, says Lux Research, a Boston-based firm that concentrates on emerging technologies. Costs are the main reason robots haven't taken more agriculture jobs, Carole Jacques reports for Lux. Sara Olson, lead author of the study, told Jacques, “Currently robots often aren’t affordable—cost remains the most significant barrier to adoption. However, the costs of many systems are coming down, while wages rise due to labor shortages in some areas, and the benefits robots bring in the form of increased accuracy and precision will start to pay off in coming years." (Lux graphic) 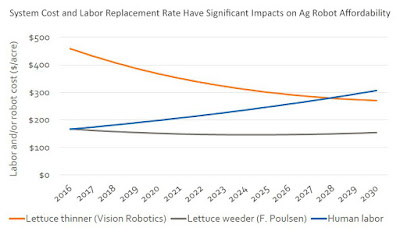 Some corn farmers are already using cost-effective auto-steer for tractors and harvesters, Jacques writes. "The gap between labor cost and auto-steer- or edrive-assisted labor in U.S. corn farming is relatively small and will become negligible by 2020." In Europe, regulatory limitations on agrochemicals have made automated lettuce weeding competitive with human labor, while in Japan's strawberry fields, where picking is "slow and labor-intensive, and labor scarce and expensive—the average agricultural worker in Japan is over 70 years old—the robot is quickly likely to become the cheaper option." (Read more)
Written by Tim Mandell Posted at 7/08/2016 11:22:00 PM