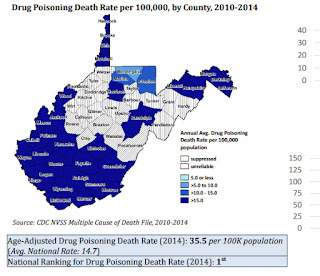 President Obama on Tuesday called on Congress to approve $1.1 billion in new funding to make opioid treatment available for every American. A White House press release includes county-level maps of every state's opioid and heroin overdose deaths from 2010-14 and how much funding each state would qualify for under the proposal. Last week the U.S. Department of Agriculture announced $1.4 million for five Appalachian projects to fight opioid use. (White House map: If the $1.1 billion is approved West Virginia would qualify for $10 million over two years to treat opioid addiction)

Meanwhile, the Department of Health and Human Services "is issuing a final rule to increase from 100 to 275 the number of patients that qualified physicians who prescribe buprenorphine for opioid use disorders can treat," the release says. "Providers, policymakers, advocates, and experts have pointed to the current 100-patient limit for buprenorphine prescribing as a barrier to opioid-use-disorder treatment. The rule aims to increase access to medication-assisted treatment and associated behavioral-health supports for tens of thousands of people with opioid use disorders, while preventing diversion." 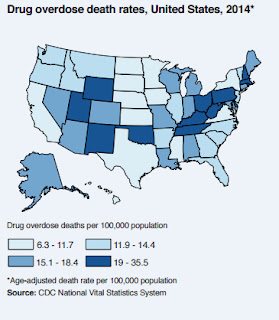 White House Drug Policy Director Michael Botticelli said if Congress approves the budget request "there would be more doctors trained in buprenorphine, particularly in rural areas where there is a shortage of physicians who can prescribe the drug," Jayne O'Donnell reports for USA Today. "House and Senate conferees are expected to meet on the conference report for the Comprehensive Addiction and Recovery Act, which would improve treatment for addiction and overdoses and reform prescribe practices." The House version of the bill has no extra money, while the Senate has $920 million, and Democrats have vowed not to sign a conference report without "significant funding," Botticelli told reporters. (HHS map)

The White House press release says that in an effort to improve drug monitoring by federal prescribers, the Indian Health Service "will now require its opioid prescribers and pharmacists to check their state prescription drug monitoring programs' databases prior to prescribing or dispensing any opioid for more than seven days." The Department of Veterans Affairs is releasing a new policy requiring its health-care providers to do likewise "in most cases . . . to determine if a patient is receiving opioids or other controlled substances from another provider and document that in the electronic patient record."
Written by Tim Mandell Posted at 7/06/2016 02:18:00 PM