The population of rural America declined in 2016, for the fifth straight year. That historic trend, and lots of other data from small towns and rural areas, led Jane Adamy and Paul Overberg of The Wall Street Journal to conclude that rural America is now the country's “basket case,” a title held by inner cities 30 years ago. 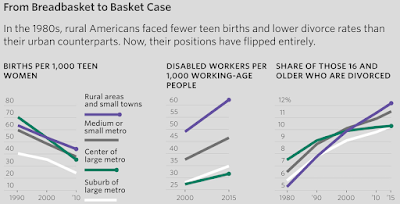 “By many key measures of socioeconomic well-being, those charts have flipped,” they write. “In terms of poverty, college attainment, teenage births, divorce, death rates from heart disease and cancer, reliance on federal disability insurance and male labor-force participation, rural counties now rank the worst among the four major U.S. population groupings (the others are big cities, suburbs and medium or small metro areas).” (Click on charts to view larger versions)

The shift has occurred over the last two decades. “Well into the mid-1990s, the nation’s smallest counties were home to almost one-third of all net new business establishments, more than twice the share spawned in the largest counties, according to the Economic Innovation Group, a bipartisan public-policy organization. Employers offering private health insurance propped up medical centers that gave rural residents access to reliable care.” But then technology happened. “By the late 1990s, the shift to a knowledge-based economy began transforming cities into magnets for desirable high-wage jobs.”

Agriculture and light manufacturing, long the economic mainstays of small towns, offer fewer jobs as farms have consolidated and relatively low-skill factory jobs have been shifted to other countries. “As employers left small towns, many of the most ambitious young residents packed up and left, too,” the Journal reports. “In 1980, the median age of people in small towns and big cities almost matched. Today, the median age in small towns is about 41 years—five years above the median in big cities. A third of adults in urban areas hold a college degree, almost twice the share in rural counties, census figures show.”

Left behind in rural areas is a population that is increasingly less healthy than the rest of the country. 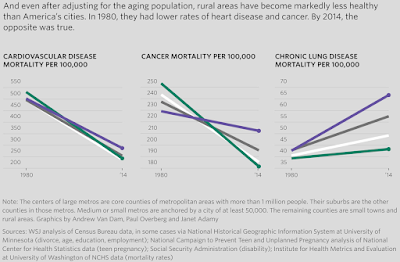 There may be other factors beyond the range of easy statistics. It can be argued that in many small towns, the advent of big-box stores decimated the local merchant class that provided much of the local civic impetus. Also, rural residents increasingly commute to other counties for work, and research by Eastern Kentucky University and the University of Kentucky's Institute for Rural Journalism and Community Issues (publisher of The Rural Blog) in 2010 showed that the longer the commute, the less likely the commuter was to read the hometown newspaper, one measure of civic engagement.

Whatever the reasons, a professor of economics at the University of California, Berkeley, who studies the trend predicts that it will continue. Enrico Moretti found that “In densely populated labor markets (with more than one million workers) . . . the average wage is now one-third higher than in less-populated places that have 250,000 or fewer workers — a difference 50 percent larger than it was in the 1970s,” the Journal reports.
Written by Al Cross Posted at 5/28/2017 09:12:00 PM