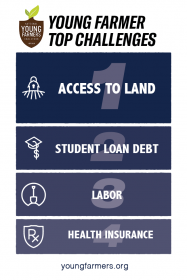 Young people are bringing much-needed new blood to farming and agriculture, according to a new survey and report from the National Young Farmers Coalition, and they're not shy about getting involved in policy debates about farm and food issues.

Who are they? In a snapshot, they tend to be college-educated and increasingly racially diverse, and many were lured to farming by the increasing demand for local and organic food. About 60 percent of the respondents were women and 75 percent did not grow up on a farm. The survey says they're "strongly committed to environmental stewardship, with 75% of current young farmers describing their practices as 'sustainable,' and 63% describing their farming as 'organic,' though many of them have not sought certification."

But these under-40 farmers can face significant challenges such as lack of land access, student loan debt, knowing about federal aid programs, making a living, and getting affordable health care. Accordingly, NYFC is calling on lawmakers to enact their "Young Farmer Agenda", a raft of suggested policy reforms based on their survey findings that would help young farmers succeed. Suggestions include: "addressing land access and affordability; helping young farmers manage student debt; increasing the skilled agricultural workforce; enabling farmers to invest in on-farm conservation; improving credit, savings, and risk management opportunities for young farmers; and addressing racial inequity among farmers."

Helping young farmers succeed is in the nation's best interests; the average age of today's farmer is 60 years old, and many don't have a family member or other designated successor to pass the land on to at retirement. That means that hundreds of millions of acres of farmland will change hands within the next five years, and qualified farmers are needed to work the land. Some legislators are paying attention, such as Reps. Tim Walz (D-Minn.) and Jeff Fortenberry (R-Neb.). who introduced the Beginning Farmer and Rancher Opportunity Act in November. The bill proposes a national strategy to address issues farmers face such as "accessing land, building skills, managing risk, reaching financial security and investing in conservation," Bryce Oates reports for The Daily Yonder.

Oates writes that securing permanent funding for the U.S. Department of Agriculture's Beginning Farmer and Rancher Development Program is also important, since the program funds beginning farmer education, outreach, training and land access.
Written by Heather Chapman Posted at 12/12/2017 10:49:00 AM