Race meant more in Alabama's election than the rural-urban divide, which the result bridged

Exit polls showed Democrat Doug Jones got 96 percent of the vote among African Americans, who are concentrated in urban areas and the Black Belt, a swath of land that was named for its soil. The largest plantations were concentrated there, and many freed slaves hung on as sharecroppers after the Civil War.

In his race with former judge Roy Moore, Jones won only one of the exit poll's four regions, Birmingham and South Central, the latter being roughly analogous to the Black Belt — the buckle of which is Dallas County, where the seat is Selma, epicenter of the battle for the Voting Rights Act of 1965. "A county where African Americans make up 70 percent of the population gave 75 percent of the vote to Doug Jones," John Nichols writes for The Nation. "That brought the Democrat 7,000 votes closer to victory. And as more votes from more predominately African-American counties came in, Jones moved into the lead."

Higher black turnout was also important. African-Americans make up 26 percent of Alabama's population, but the exit poll determined that they made up 30 percent of the vote yesterday.

Alabama is the ninth most rural state, with 41 percent of the population living in rural areas, but it's becoming more urban. First map below, by Strange Maps contributor Mark Root-Willey, via The Vigorous North blog, reveals the Black Belt by way of distribution of cotton production (2,000 bales per dot) in 1860, just before the beginning of the Civil War (colors of counties indicate their vote in the 2008 presidential election). Second map, showing vote by county, is adapted from CNN. Newly blue counties include Madison (Huntsville), on the Tennessee border, and Tuscaloosa and Talladega, west and east of Birmingham. Dallas County overlaps the "ontgo" in "Montgomery." 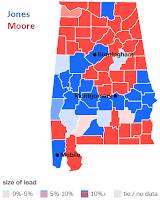