The November Creighton University survey of rural bankers in 10 Midwest states where agriculture and energy are critical to the economy showed declining economic confidence and dim predictions for holiday retail sales. The index is a survey of bankers in about 200 rural communities with an average population of 1,300 in Colorado, Illinois, Iowa, Kansas, Minnesota, Missouri, Nebraska, North Dakota, South Dakota and Wyoming.
The overall economic confidence index fell for the first time since April of this year, from October's 53.2 to 46.8. (An index of 50 is growth-neutral.) Recent improvements in farm commodity prices and direct federal aid to farmers, plus low interest rates, helped keep the bankers' confidence from dipping further, reports Creighton economist Ernie Goss, who does the survey. Home sales remained strong, but the reported loan volume reported was the lowest since the survey began in 2006. Other findings: 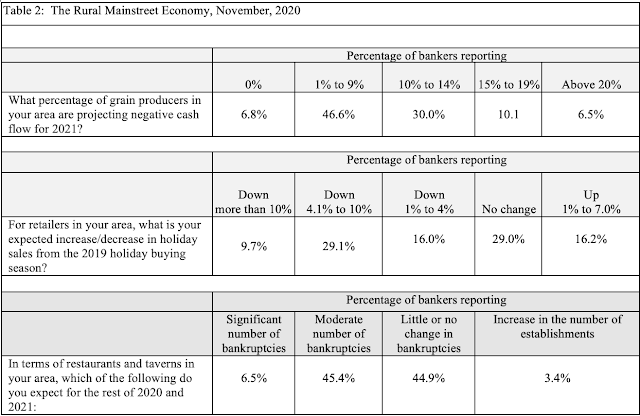