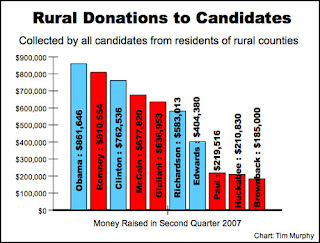 In this year's second quarter, Sen. Barack Obama, D-Ill., received $861,646 in campaign contributions from rural residents, the most collected by any candidate, according to Daily Yonder analysis. Republican Mitt Romney came closest to Obama's total with $810,554 in rural contributions. Obama had almost twice as many rural contributors as did Sen Hillary Clinton, D-N.Y., but her rural givers wrote bigger checks, giving her a rural total of $762,536, not far behind Obama's.

Obama collected money from 888 of the 2,580 rural counties; Romney scored in 777, many of them "ski counties in Utah, where he headed the 2002 Winter Olympics," Bill Bishop and Tim Murphy write. Their analysis also showed that contributions from rural residents were dwarfed by those from their urban counterparts in the second quarter, as candidates collected $5.7 million in rural areas but $101 million from urban Americans. This breaks down to an average of 49 cents per urban American compared to 8 cents per rural American. The rural contributions were almost equally divided between the Democratic and Republican parties. (Read more)
Written by Al Cross Posted at 9/18/2007 03:24:00 PM