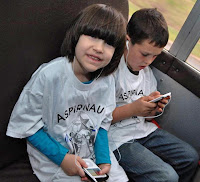 Education initiatives are seeking to improve learning by putting the latest technology in students' hands. Rachael King of Business Week reports on a few of these programs, which make use of iPods, laptops and the Internet to help rural students stay up to date with their peers.

Photo by King shows students using iPods on a school bus in a pilot program of the Aspirnaut Initiative in Grapevine, Ark., which has transformed the bus into a second classroom for the children who spend 15 hours a week riding it, she reports. The initiative has brought wireless Internet to the bus and given each of the children laptops or iPods so they can keep the long commutes from being lost time. That program was started by Billy Hudson, a Vanderbilt University biochemistry professor and Grapevine native, who wanted rural children to be prepared for today's economy. "People are seeing in rural areas that the jobs they know about are being outsourced," he told King.

A school in Mobile, Ala., is also using the Web to help its students experience a world beyond their community. There, students were struggling to learn vocabulary because words such as "trampoline" were totally outside their frame of reference. To address this, the class has begun taking field trips and recording them on podcasts and blogs, so that the information is available to all in the school for future reference. In many of the examples King cites the money for the programs came from grants sought by the schools and came from companies such as Apple and Microsoft. With the introduction of more technology in the classroom, King writes, there came the need for specific guidelines to keep the tools from becoming distractions or even threats. The guiding rule is usually this: The students use them correctly or lose them.

Still, the technology could mean a world of difference for these rural children, one educator told King. "We're not just competing with school systems in the state," Suzanne Freeman, superintendent of Trussville City Schools in Trussville, Ala., said. "Our kids are competing with India, China, Japan, and other countries around the world." (Read more)
Written by Al Cross Posted at 9/17/2007 11:29:00 AM