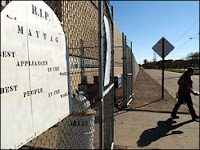 A year after Whirlpool Corp. bought rival appliance maker Maytag for $2.6 billion, the final Maytag plant closed in Newton, Iowa, yesterday. The last washers and dryers rolled off the assembly line around midday, and the final worker shut off the lights for the last time at 2:15 p.m., reports the Des Moines Register. The town of about 16,000 had been making Maytag products for the last 114 years, writes Ken Fuson. Outside the plant, workers had hung signs such as this "R.I.P. Maytag" at left in an Associated Press photo by Steve Pope.

"Some workers expressed anger Thursday," Fuson writes. "About a dozen people left their work boots in front of the west employee entrance at Plant No. 2, either on the ground or dangling from the fence. One man took off his shoes, left them on the sidewalk, and walked to his vehicle in his white socks. Mostly, though, there was sadness." (Read more, including a video report about the final day)

At one time, Maytag employed 4,000 people in Newton (which is about 30 miles east of Des Moines), but recent lay-offs had reduced the number to 1,800, reports AP. "The machines once made by Maytag — founder Fred Maytag lies in a family mausoleum in Newton Union Cemetery — will be redesigned to fit on a Whirlpool chassis and built by workers in Mexico and a nonunion factory in Clyde, Ohio. The employees in Ohio earn significantly less than the union-represented workers in Newton."

The Newton Daily News has focused some of its recent reports on the future of the Maytag site. In Thursday's edition (Friday's is not yet online), the top story discussed Iowa Telecom's purchase of part of Maytag's former downtown headquarters. Iowa Telecom bought the site for $1.5 million earlier this year, but Iowa Telecom, Jasper County and the City of Newton are awaiting a state ruling on the property's value, reports Andy Karr. Maytag's downtown campus had been valued at $12.7 million in 2005; the closing of the Maytag plant will lower that figure.Other stories have focused on other new tenants, such as Caleris, an information technology company that employs 90 people and hopes to add more. (Read more)

UPDATE: The Friday edition of the Newton Daily News is online now, including a set of first-hand accounts from the "Maytagers" themselves, as well as report on the news conference held by local leaders outside the plant.
Written by Tim Wiseman Posted at 10/26/2007 11:53:00 AM