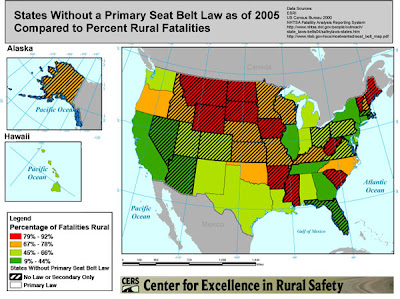 Resistance to meaningful seat-belt laws is often stronger in rural areas, but states without such laws have more fatalities on their rural roads, according to a study by the University of Minnesota Center for Rural Safety.

"Of the 10 states with the highest percentage of fatalities in rural areas in 2005, none had primary seat belt laws, or laws that allow law enforcement officers to pull people over for not using their seat belts," the center said in a release. "In contrast, 13 of the 20 states with the lowest percentage of fatalities in rural areas had enacted primary seat belt laws." The map above reflects laws was they were in 2005; Kentucky, for example, has since passed a primary law.

The Federal Highway Administration says 57 percent of fatalities occur on rural roads (those located outside of areas with a population of 5,000 or more) though only 21 percent of the U.S. population is generally considered rural. Just over half of the fatal rural accidents involved a driver from a metropolitan area.
Written by Al Cross Posted at 11/30/2007 02:24:00 PM