Do disparities of income and health-care access affect life expectancy? Perhaps. A new study has found that while the overall life expectancy for American men and women rose between 1961 and 1999, the life expectancy of women has declined significantly in recent years in 180 U.S. counties, mostly rural ones in Appalachia and the deep South, reports The Associated Press.

"Researchers blamed the decrease in women's life expectancy on high blood pressure as well as chronic diseases related to smoking and obesity, such as lung cancer and diabetes," AP reports. (In the researchers' maps below, the red counties experienced significant declines, while orange ones had less significant declines, of 0.5 years or less, and those in green had increases, more significant in dark green counties.) 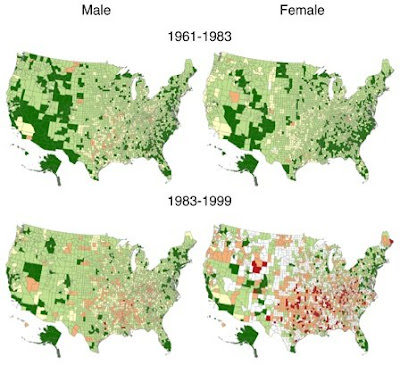 The study, based on data from the National Center for Health Statistics and the U.S. Census Bureau, found that nationwide between 1961 and 1999 the life expectancy for men increased from 66.9 years to 74.1 years, while women's life expectancy rose from from 73.5 years to 79.6 years. In the 180 counties that saw declines in women's life expectancy, the average was 75.5 years. "The study emphasizes how important it is to monitor health inequalities between different groups," the researchers wrote, "in order to ensure that everyone - and not just the well-off - can experience gains in life expectancy." (Read more)

The study was published this week in the online journal PLoS Medicine. To read the full study go here.

UPDATE, April 29: The Daily Yonder posts better maps and lists of the counties with significantly lower life expectancy and reports that the rural county with the greatest decline in life expectancy, for both men and women, was McNairy County, Tenn. To read the details, click here.

Thank you for posting this. Very helpful and just what I was looking for. I posted a link to your article at http://downsouthstories.blogspot.com/