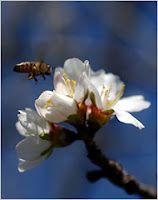 The number of beekeepers reporting colony collapse symptoms decreased last winter, but colony death rates still remain high enough for worry. "A survey of beekeepers for the January issue of the Journal of Apicultural Research found that the percentage of operations reporting having lost colonies but without dead bees in the hives -- a symptom of colony collapse disorder, or CCD -- decreased to 26 percent last winter, compared to 38 percent the previous season and 36 percent the season before that," The Associated Press reports. (Photo: A bee pollinates an almond tree, performing one of the species' vital functions)

The percentage of total dead colonies that displayed CCD was 36 percent last winter, down from 60 percent the previous winter. Reports of the disorder date back to 2004, AP reports, but scientists are still looking for a cause. ''The story is really complicated. We thought we'd have a simple explanation,'' Dennis vanEngelsdorp, Pennsylvania's acting state apiarist, told AP. ''CCD drew our attention, but there are lot of things'' affecting the bees.

Even with the apparent decline in CCD reports, an estimated 29 percent of all U.S. colonies died last winter, about 11 percentage points higher than what beekeepers consider normal losses, AP writes. ''Losses are shifting. There are fewer operations with CCD, though they still lost a lot of colonies,'' vanEngelsdorp, the lead author on the study, told AP. ''But other factors are killing bees.'' He points to starvation, poor-quality queen bees and weather as leading factors. (Read more)
Written by Jon Hale Posted at 1/27/2010 09:40:00 AM