'Deep Down,' a story of mountaintop removal, told mainly in human terms, premieres

Most films about mountaintop-removal coal mining have emphasized its environmental destruction and been told overwhelmingly from the opponents' point of view. The latest cinematic treatment of the subject takes a different tack, looking at the controversy through the lives of two friends in Eastern Kentucky: one who opposes surface mining, the other who agonizes over leasing his land for it.

"Deep Down: a story from the heart of coal country" also shows a relatively successful organizing effort against a mountaintop-removal mine proposed for Wilson Creek, just off KY 80 in Floyd County (at center of MapQuest image below; reclaimed mine at upper left; star locates Maytown Fire Deaprtment; though labeled Langley, the place is known locally as Maytown). "Maytown has become an example for small communities throughout Appalachia," the hour-long film says near its conclusion. It premiered last night on Kentucky Educational Television. (Click on map for larger image) 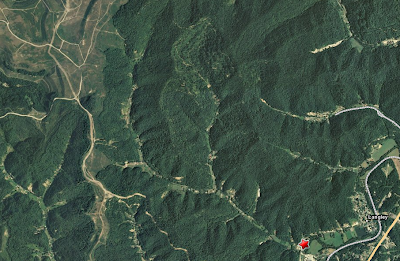 The film's protagonists are anti-stripping activist Beverly May and her friend Terry Ratliff, a self-employed woodworker who has no retirement fund, needs money and is offered $75,000 to lease 6 acres for part of the proposed mine. They and others illustrate the internal conflicts over coal, from the mining engineer who belongs to the Sierra Club to the miner at a public hearing who tells May and others, "You look at me any way you want to. Deep down in the back of your heart, you know you're wrong." May replies, "We're all the victims of the same coal companies; it's just that you're on top of the mountain and I'm down at the bottom." Later, she says, "In our culture it is difficult to compare human values to economic values."

Ratliff, whose father was a miner, tells a filmmaker that he's "straddling the fence" on the lease. "Peace and quiet, that's worth a lot to me." But then he is shown driving an all-terrain vehicle ona  reclaimed mine site and saying, "No matter how bad we screw it up it'll come back." He says of May, "She looks at this as a personal violation." His daughter Carly is also conflicted: "Mining IS our economy . . . I'm trying to be positive about it, but how positive is it if the foundation of my house gets busted?"

In the end, Ratliff doesn't lease, saying the land agent vastly exaggerated the money he would get, and May and her neighbors block the proposed mine's plans to use their road as a haul road, with the help of County Judge-Executive Robert Marshall, who tells them, "This has always been our lifeline ... then along came the mountaintop removal and the trucks got bigger and bigger and bigger. ... I'm with you ... to try to make this coal company own up to what they should." More importantly, the coal company fails to get a waiver of the requirement that mined land be returned to its approximate original contour, and files for bankruptcy protection. "The price of mining on Wilson Creek has really gone up," May says. "We made a difference. Floyd County's a little more democratic than it was two days ago."

KETKY will show the documentary at 11 a.m. Friday, midnight Saturday and June 17 at 2 p.m. The KETKY channel is available for free to all cable systems in the state. PBS is expected to air the film later.
Written by Al Cross Posted at 4/23/2010 12:20:00 AM

What a great film! I am looking forward to see this. Can you please be sure to post more updates about this film and issues surrounding it? I'd like to know what I can do.