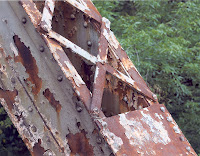 Kentucky officials say they will tell CSX Transportation to paint or seal an old railroad bridge, right, that is is flaking lead paint into the Barren River and its banks at a main entrance to the city of Bowling Green, pleasing a local businessman and philanthropist who has been pushing the issue to the point of having soil samples taken and tested.

Shawn Cecil, manager of the Superfund branch for hazardous-waste sites, told Robyn Minor of The Daily News in Bowling Green, "We plan to discuss the flecking paint and the potential release (of contaminants) and ask them to abate that in some fashion or another. I don’t have any sort of direction they are required to go. We will tell them to meet certain goals, not how to get there. If they want to peel off (and properly) dispose of the remaining paint or seal it or paint it with a clear material, that is up to them." A CSX spokesman said, "We are reviewing options and are in discussions with the state." (Read more, subscription required)

UPDATE, Dec. 5: Philanthropist David Garvin told the Daily News that when he cleaned and painted two nearby bridges, "EPA monitored and required me to prevent any lead paint from entering the environment. We netted the entire bridges when we sandblasted off the old paint. They told me that I could not even spill a coffee cup of the lead residue into the river. Why should this same standard not apply to CSX?” The story updates the overall situation. (Read more)

Garvin told The Rural Blog that Kentucky's action has implications for other states. "If the state can force CSX's hand on this, it will be the first time that I know of anywhere in the U.S.," he wrote. "CSX has over 10,000 bridges. This would be a precedent that would have huge implications, both for the protection of the environment and for CSX's pocketbook." (Garvin photo)

Similar problems have come to light in several communities around the country but the issue has gained little national attention, For more background, click here.

UPDATE, Dec. 29: Garvin has lined up a qualified contractor to do the work and is seeking help from the state legislature, Democratic Gov. Steve Beshear and U.S. Rep. Brett Guthrie, R-Bowling Green, to get things moving. (Read more)
Written by Al Cross Posted at 12/06/2010 03:53:00 PM