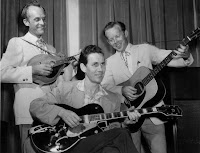 From the late 1940s until the early '60s, the Louvin Brothers maintained "country music’s emotional, full-throated harmony tradition," writes Cooper. They maintained a strong interest in gospel music, in which they started. After the brothers quit performing together in 1963 (Ira died in 1965), Charlie Louvin had a successful solo career that included 16 Billboard Top 40 country hits in the ’60s, such as "See the Big Man Cry."

Cooper reports that in the '40s, one teenage fan attended a Louvin Brothers show in Dyess, Ark., and Louvin took time to chat with him while munching on soda crackers. Years later, the fan became a star himself: For much of his career, Johnny Cash ate two soda crackers before he went onstage, in emulation of Charlie Louvin. (Read more)
Written by Lu-Ann Farrar Posted at 1/27/2011 04:53:00 PM