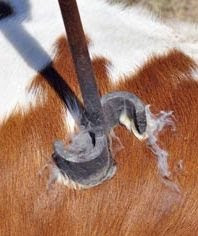 The livestock brand, an icon of the American West, is being challenged by the U.S. Department of Agriculture as the official identification for some livestock. "The USDA in March announced that ear tags will be the official cattle ID," Tom Lutey of the Billings Gazette reports. The tags may help regulate diseases by tracing it back to the source across state lines; branding, used to identify cattle on open ranges in the West, is an unfamiliar practice in many states. (Dickinson Cattle Company photo)

Gilles Stockton, a Montana rancher, USDA adviser and supporter of branding, told Lutey that 14 states rely on branding for livestock identification but many other states are ill-equipped to use and record brands. "There is, therefore, pressure to not accept brands as a means of official identification," he said. "A slowly emerging disease like foot-and-mouth disease would be in the animal for months before it ever produced recognizable symptoms. By that time, disease exposure would have occurred and ear tags wouldn't matter."

Ear tags work well in livestock operations where animals live in stalls and are easy to track, but many ranchers prefer permanent brands because they do not fall out and easier to read from a distance, Lutey reports. The ear tag ID program is expected to be published as a regulation in the Federal Register by the end of the month. (Read more)
Written by Al Cross Posted at 5/03/2011 05:08:00 PM