Does your area have a food desert, defined as a low-income census tract where a substantial number or share of residents has low access to a supermarket or large grocery store? Now it's easy to check, via an interactive map prepared by the U.S. Department of Agriculture. Here's a view of food-desert census tracts in Missouri and adjoining states (click on map for larger image): 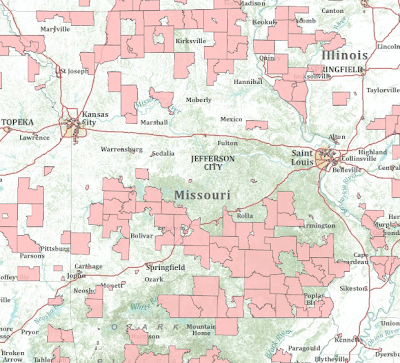 The map's zoom and transparency features allows users to create county-level maps suitable for publication. To qualify as a “low-income community,” a census tract must have a poverty rate of 20 percent or higher, or a median family income at or below 80 percent of the census tract's median family income. To qualify as a rural “low-access community,” at least 500 people and/or at least 33 percent of the census tract's population must reside more than 10 miles from a supermarket or large grocery store. (For urban tracts, the distance threshold is one mile.) Here's a story from CNN's Eatocracy site. The documentation for the map is here.
Written by Al Cross Posted at 5/06/2011 02:32:00 PM