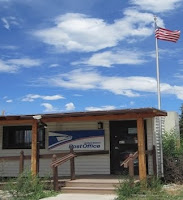 Earlier this month, the Congressional Research Service released a report to address common questions about possible post-office closures. The report defines "post office," tells how many there are and how many face closure, describes the Postal Service's authority to close offices, explains the closure process and when it will occur, speculates on the number of employees who may lose their jobs, and identifies legislation on post offices.
The report says 4,380 retail facilities may close – 3,652 announced on July 26 and 728 identified in 2009. Of those earmarked for closure, "two thousand at the top of the closure list are primarily rural and frontier," Carol Miller, community organizer from Ojo Sarco, N.M., population 400, writes for the Daily Yonder. (Yonder photo by Miller)
Miller, whose local post office closed six years ago in a round of closings, suggests federal spending cuts almost always start with rural post offices referring to the Postal Reorganization Act of 1970 and the Postal Accountability and Enhancement Act of 2006 that resulted in many changes to the postal service. "Nothing brings home to a community how absolutely unimportant they are to the federal government more than losing a post office," Miller writes.
Written by Deloris Foxworth Posted at 8/29/2011 08:02:00 PM