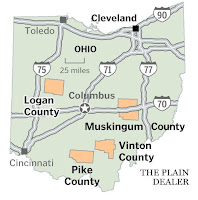 Marijuana farms cultivated by Mexican nationals continue to crop up across the country. Recently, farmers have made their way into Southern Ohio, where they grow massive amounts of pot in the region's hilly and brushy forests. John Caniglia of The Plain Dealer in Cleveland reports that state authorities think these growers are funded by Mexican drug cartels, but federal officials have not been able to link growers in Ohio with any larger drug operations. (Map: counties with recent large busts)

Officials do say Mexican growers come to the state to take advantage of temperate weather, good soil, the vast rural landscape and the willingness of Ohio buyers to pay higher prices. Officials are constantly on the hunt for new crops, Caniglia reports. Within the last year, state and local police have seized 39,000 plants in two separate busts. No one was arrested in either case, but officials noted that at each pot field, campsites with food from Mexico were found. In another incident, 11 Mexican nationals, 10 of whom were here illegally, were arrested on charges of cultivating marijuana. They all pleaded guilty and were sentenced to less than two years in prison.

Scott Duff, supervising agent with the Ohio Bureau of Criminal Identification and Investigation, told Caniglia that genetic and cultivation improvements make pot much more potent now than it was in the 1960s and 1970s. Levels of its psychoactive ingredient, tetrahydrocannabinol (THC), can now reach 18 percent compared to the 4 percent of 40 to 50 years ago. (Read more)
Written by Ivy Brashear Posted at 9/28/2011 08:34:00 PM