A new report by National Public Radio and the Center for Public Integrity says state and federal regulators are still struggling to enforce a major part of the Clean Air Act, leaving many communities "exposed to risky concentrations of benzene, formaldehyde, mercury and many other hazardous chemicals."

The journalistic collaboration has produced an interactive map that allows users to look up Environmental Protection Agency data on approximately 17,000 facilities that have emitted hazardous chemicals into the air. (Click on map below for interactive version) 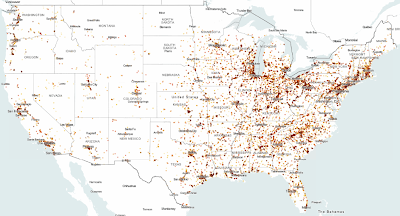 The "air toxics" issue has lingered for decades. The reporters found that more than 1,600 facilities are labeled "high priority," justifying urgent action, but nearly 300 of them have been in that category for more than a decade. About 400 of them "are on an internal EPA 'watch list,' which the agency has kept secret until now," they write. For the list, in an Excel spreadsheet, click here.

Enforcement has "been delayed by tension between the EPA and state environment programs, budget cuts and a system that allows companies to estimate their own toxic emissions," NPR and CPI report, noting shrinking state and EPA budgets as additional reasons for the lack of enforcement. (Read more)

This evening on "All Things Considered," NPR rural correspondent Howard Berkes reports on toxic pollution by a carbon-black plant in Ponca City, Okla. Thursday on "Morning Edition," he focuses on another rural community, Chanute, Kan., which has a cement kiln fired by hazardous waste. UPDATE: The Chanute story is here; a sidebar is here and a story about the cement-kiln rules is here.
Written by Deloris Foxworth Posted at 11/07/2011 04:10:00 PM