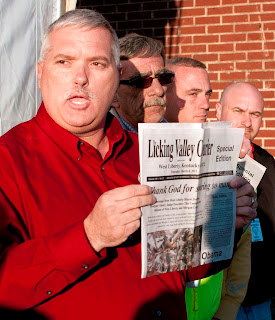 Yesterday we wrote about the newspaper in a tornado-devastated Kentucky town struggling to publish after its office and the home of its publisher were destroyed. Today, at a press conference timed to start exactly a week after the storm hit, Morgan County Judge-Executive Tim Conley held up a copy of West Liberty's Licking Valley Courier and said it was a sign the community will return, independent journalist John Flavell reports. Standing next to Conley is West Liberty Mayor Jim Rupe. The headline reads, "Thank God for sparing so many." (Flavell photo) 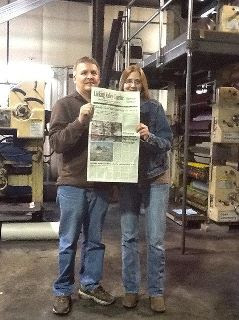 The weekly newspaper established its first online presence in the wake of the tornado, as reporter Miranda Cantrell (at right in photo with co-worker Ricky Adkins) started a Facebook page that includes news updates and the paper's story about the disaster. She told us, "It was one of the proudest moments of my life when I saw that press rolling our papers" at the Mount Sterling Advocate, the paper's normal printing location.
Written by Al Cross Posted at 3/09/2012 10:18:00 PM

Putting out the first post tornado issue should help everyones spirits. I wish to report a situation that sounds like a scam at Salyersville. My son-in-law contacted an Atlanta advertising on Craigslist. He related he could have 40-50 people Fri. morning to do construction. Fri. they worked 12 hrs. cleaning the school interior, removing the ceiling tile. The Atlanta contractor said FEMA fired them so they were not needed. They could come back Saturday and work for another Co. #2. Those that came back were subjected to the same procedure. Another excuse was put forth and the 2nd Co. was fired at the end of the day and no one was paid. The offer to come back and work for Co. #3 was extended. They did buy some fried chicken and offered it. One excuse is FEMA has a standing contract with Balfour in Louisville to service these disasters. There is a crew of Mexicans showing up and apparently not getting fired daily. I'm making this brief you need to talk to Aaron in Morgan Co. at 502-797-8324. I'm W.J. Fielden in Louisville(502-896-8081).