More than half of U.S. counties have been declared disaster areas, 90 percent due to drought

More than half of U.S. counties are now disaster areas, 90 percent because of the ongoing drought that has been brutalizing the nation. That brings this year's total to 1,584 counties in 32 states, reports Michael Muskal of the Los Angeles Times. The latest disaster designations, made Wednesday by Agriculture Secretary Tom Vilsack, were in Arkansas, Georgia, Iowa, Illinois, Indiana, Kansas, Mississippi, Nebraska, Oklahoma, South Dakota, Tennessee and Wyoming. (Hays Daily News photo by Steve Hausler)

Vilsack also announced that the federal government will be concentrating on helping beleaguered farmers and ranchers by opening up approximately 3.8 million acres of conservation land for grazing and haying. Further, he said, crop insurance companies have agreed to provide a grace period for farmers who need more time to pay insurance premiums. Muskal reports that farmers will have an extra 30 days to make their payments without having to pay a penalty.

Here's the drought map issued this morning. Click on the image for a larger version. 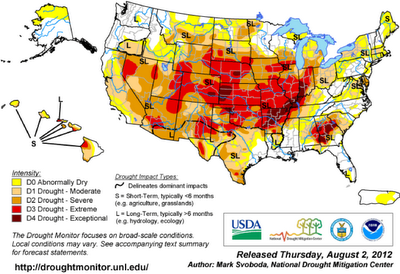